It had to happen some day.  We woke up in sleepy and charming Eunice, Louisiana, and three hours later we had entered Texas, heading for a Houston freeway.

Things changed almost the minute we crossed the border.  Plantations became ranches.  Cows became cattle.  Cajuns became cowboys – even though they may still be Cajuns.  Every billboard has a reference to big-ness.  Yup, we’re not in the South anymore.

We celebrated surviving the big-city Houston traffic by lunching at Hugo’s, a celebrated Mexican restaurant that was also light years away from Ronnie’s Cajun Café.  Our pumpkin and tortilla soups were outstanding; the grilled octopus and taquitos pollo were superb. 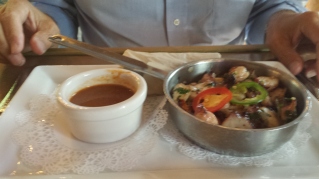 Then, because we hadn’t been in real stores for many weeks, we went to the Houston Galleria, which is a city unto itself, complete with a Westin and a skating rink.  Don got his hair cut and I trolled Nordstrom’s, etc.  I was hoping to get a new winter jacket, but Houston isn’t really the place to do that.  However, we did have some retail satisfaction, and left for our hotel.

Thirty minutes and some adult language later, we were safely ensconced in our River Oaks room.  The view is pure Houston – ceaseless traffic and big modern buildings rising from the prairie.

Once in, we locked the door and got some rest before tackling this town in the morning.

2 thoughts on “We cross the line”