Amsterdam, Holland. There is so much that is lovely about this city. We have been visiting here for 45 years, and it never fails to impress.

But it has taken on a whole new glow now. The hippie invasion of the late ’60’s is long gone, and Dam Square is no longer a garbage dump of stoned freaks. The area around Centraal Station is completely cleaned up and it’s extremely tourist-friendly. There is no drinking allowed on the streets, and no more tours to gawk at the red light district. 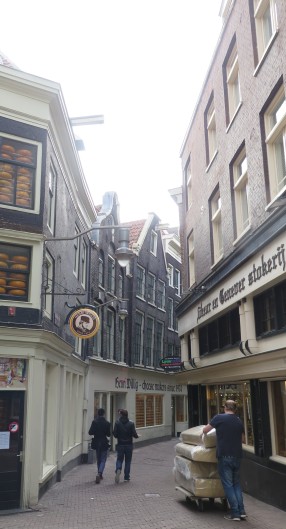 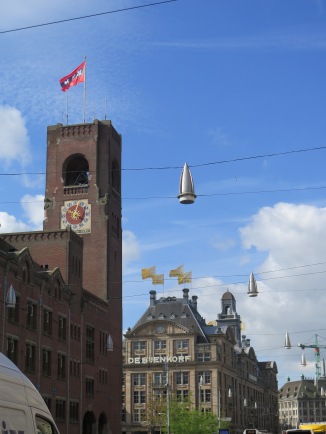 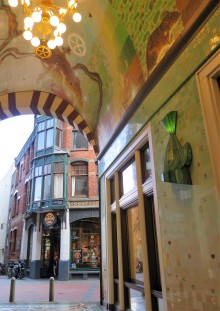 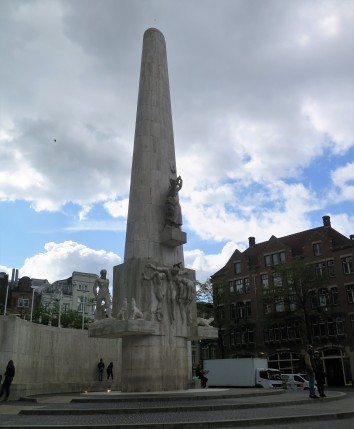 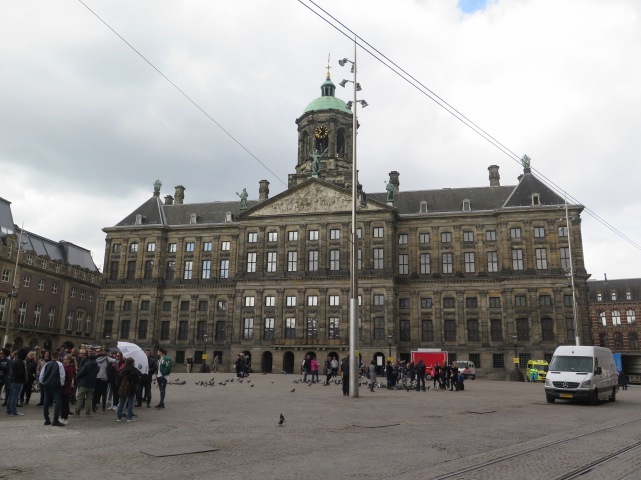 What remains is the intrinsic beauty of this city, some of whose 16th century remnants are still here, fitting in gracefully with the new additions of the later centuries.

Today we walked around and got reacquainted with this city, the first we ever visited together, in 1973. Ten years ago we rented a lovely second-floor apartment on the Herrengracht canal, and waved to all the tourists on the canal boats. We browsed through a book market and stopped into five-hundred year old enclave for impoverished Catholic lay women. There were several of these, and this one contains the oldest house in Amsterdam – note that it’s wooden – and the Presbyterian Church where the Pilgrims prayed before they took off for points west. I’d take any of the lovely homes in this special corner of the city. Last time we visited, we were the only people there, but times have changed. 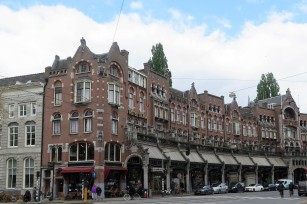 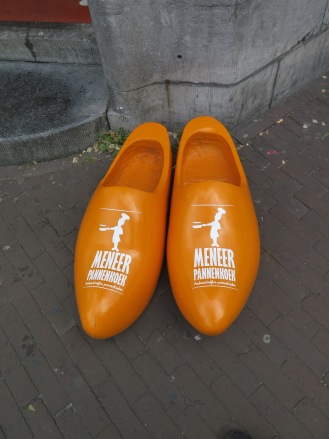 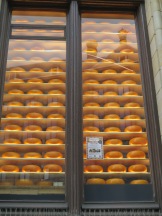 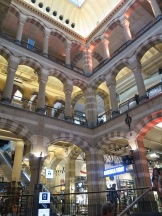 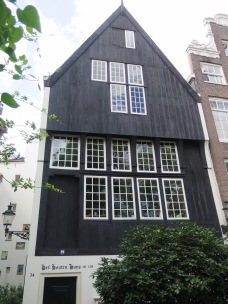 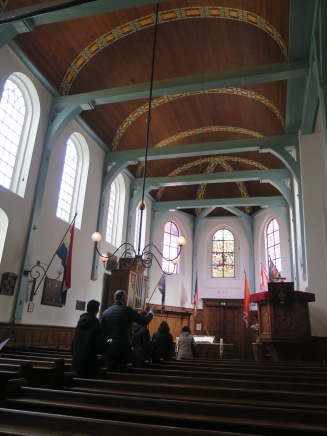 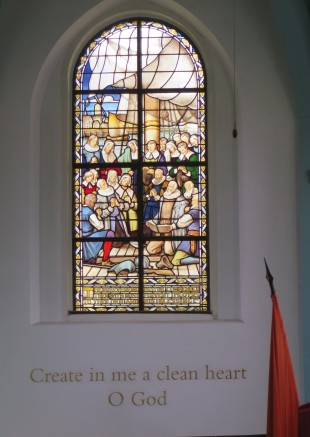 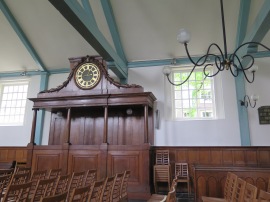 And then there’s art with a capital A here. The Van Gogh Museum was being co-opted by a David Hockney exhibit (?!) and there were no entry times available for the next four days. So we visited the good old Rijksmuseum, which has recently reopened after a long renovation. We limited ourselves to the Rembrandts – most of which were in a special exhibit we couldn’t get tickets for today – and the Vermeers, plus a few other favorites from both of their eras including a whaler’s cap from the 17th century, found intact, as well as some wonderful furniture. 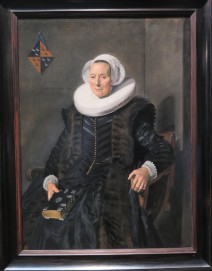 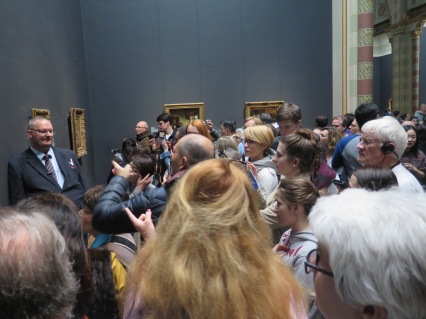 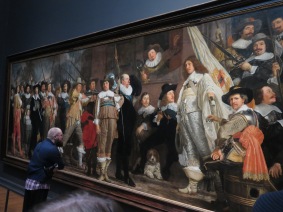 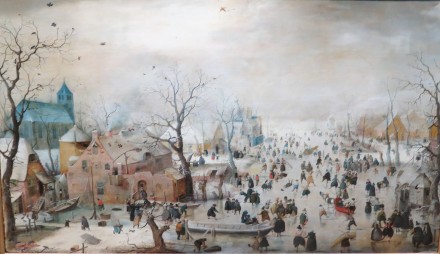 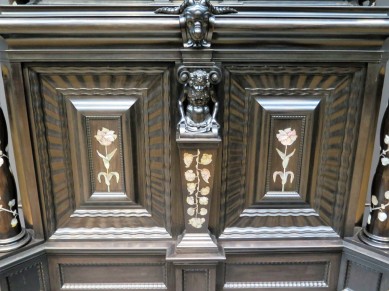 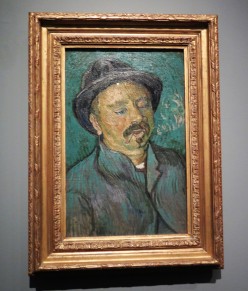 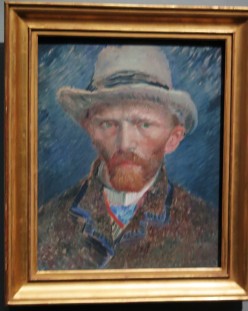 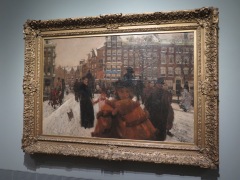 The art is old but the crowds are new. While it was good to see old friends, many of whom often travel to New York, the number of other tourists (yes, I realize we are tourists too) was rather numbing. Lovely things to see, but the admission should come with a free Valium.

So that was our day in Amsterdam. We are now faced with packing up once again. This time we will just walk across the way to the train station tomorrow morning and head off to London – secure with all of our luggage. But I think we need more time back in this special place. Don’s already planning, I can tell

When Jo spied a restaurant named Wurst & Schnitzelhaus at the rear of Amsterdam’s Centraal Train Station I knew we’d be making a visit. And for our final meal on this trip to Amsterdam we tried it out. Jo’s love of schnitzel actually started right here in Amsterdam in 1973 when we went to a restaurant called Glory of Holland, a tourist restaurant that was paneled with floor-to-ceiling dark carved woodwork and loaded with Delft objects. I don’t remember if the waiters wore “traditional” costumes, but they probably did. (The restaurant is long gone. The closest thing I could find with an internet search is a hot Amsterdam restaurant called Guts & Glory. I don’t think it delivers the same type of experience we had in 1973.)

But at that meal at Glory of Holland, which we both remember with great fondness, we ordered schnitzel Holstein. That’s schnitzel with a fried egg on top. It was, at the time, a food revelation to us, especially for Jo who has been on the search — sometimes successfully — for a meal that matched that memory.  So far the closest we’ve come to is the Weiner schnitzel served at the restaurant/pastry shop Demel in Vienna. That was absolute perfection and almost all the other restaurants in Austria came very close to that standard. Other places, not so much.

So, how did Wurst & Schnitzelhaus hold up? It wasn’t Glory of Holland and it certainly wasn’t Demel, but it was OK. The meat was pork instead of the more authentic veal. And actually, the schnitzel Jo had at the Kaiser restaurant in the Austrian-controlled Garden of Dreams in Kolkata was a little better. The breading tasted fresher.

We were somewhat anxious when we saw the menu and found a plethora of very odd variations on the schnitzel theme. Sweet-and-sour schnitzel? Sate-schnitzel? Hawaiian schnitzel? That’s just wrong. Stick to the basic because it could never be improved, if done right. Despite modest disappointment, Jo cleaned her plate, which included a little salad and fried potatoes with bacon. Potato salad was a choice, but it was not warm potato salad, so why bother?

I had a nicely grill bratwurst with a side of mild sauerkraut. 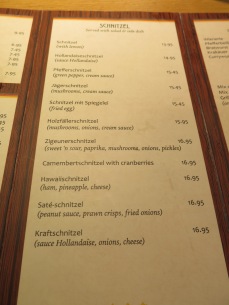 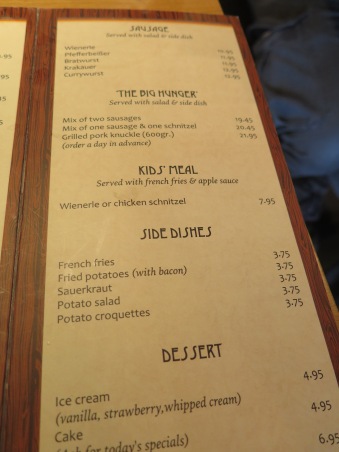 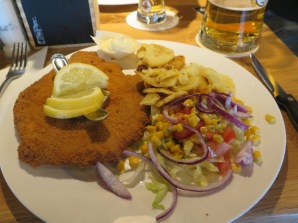 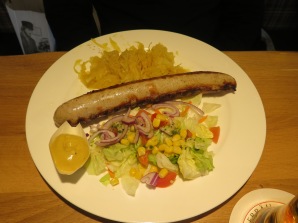 P.S. The hotel has something we’ve never seen before: A dispenser for cans of cold beer sitting right next to the Pepsi machine.

It was Heineken, of course. I guess there’s no problem with underage drinkers hitting the machine for a few cans of brewski. (Like Germany and Belgium, the Netherlands is beer-focused. We see people — both men and women — drinking beer at breakfast.)