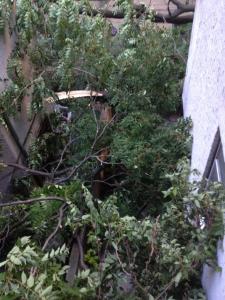 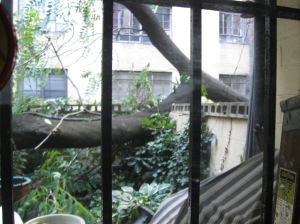 In New York on Friday night, we were tucked in bed and sound asleep at 3 AM when it suddenly sounded like the end of the world. What on earth? Had our building started to collapse? Nuclear war? Car bomb? No, it turned out that a giant tree in the neighboring yard had decided it had had enough and split in a spectacular way. Most of its branches ended up in our yard, by some miracle not breaking our back door, but doing damage one and two buildings further on. As it crashed over our garden wall – a tasteful edifice of cement block – it actually took part of it down, and the rest seems ready to fall.

Thankfully, this was not the first moment we got to meet the neighbors whose tree it was. We were already acquainted and were doing a lot of emailing by 4 AM. Naturally the tree had already been identified as needing to be removed, and was scheduled to be taken down on this coming Tuesday. Guess it wanted to go in its own way, on its own time frame.  See the results from an apartment above (left) and out our window (right).

We’ve been shaded by this hardy New York tree-grows-in-Brooklyn ailanthus for over 35 years, so it’s very sad to see it splayed over our garden. Getting up after grabbing a little more sleep yesterday, we were a bit surprised to realize we hadn’t dreamed it.

Is this the reason that it’s been hard to believe we are really starting our trip soon? Is someone trying to tell us that it’s dangerous out there? Or is the message that it’s time to pull up some roots and to go somewhere different, to try new adventures?

Still mulling that one over. We leave tomorrow.

One thought on “Omens and Portents”