Munnar. Don at the keyboard.  Now that we’ve officially entered the Kerala area of India along the southwest coast of the country, I figured it was time to start learning about the special foods and cooking techniques of the region. Munnar is the home of one of the most foremost cooking teachers and cookbook authors of traditional and authentic cuisine of Kerala, Nimi Sunilkumar.

I was able to get into one of Nimi’s classes. The experience was both illuminating (and delicious) and frustrating at the same time. Illuminating, because Nimi showcased a fairly wide range of dishes from Kerala — from breakfast to main meal selections to dessert. Frustrating, because some of the ingredients that are critical for replicating these dishes are either impossible or nearly impossible to get in America.  For example, ever see coconut vinegar at our local Gristede’s so-called supermarket?

Nimi’s classes are held in her home in the central area of the town of Munnar. (We stayed about 7 miles away in the countryside.) Her demonstration kitchen is in an open-air room — a good thing to have if you are frying up a lot of onion, garlic, ginger and loads of the spices so essential to Indian cuisines of all types and with fumes so lingering that it could take a few days to air out a room. In our apartment, the odors from our windowless kitchen seem for some reason to collect in our bedroom. While the meal might have been great, we don’t really want to relive it all night long for several days. Happily, I’ve taken to cooking Indian food outside in the backyard in an electric skillet. Let the rest of the neighborhood share the tempting aromas of our meals. 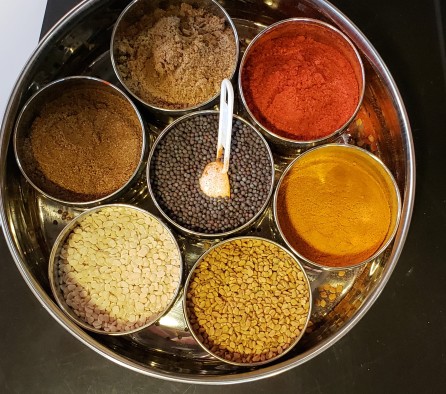 There were ten people in attendance in Nimi’s class. Mostly young Canadian and British couples, an older British woman who really knew her Indian cuisine, and me. Interestingly, two of the young couples were Indian descendant and were traveling through India to connect with their Indian heritage, culture and food that they feel they had missed as second- and third-generation emigrants.

Nimi herself is furiously trying to collect traditional recipes from all over India because, she says, they are rapidly disappearing. Hello, KFC and McDonald’s.

As we learned in the class, the main characteristic ingredient of almost every Kerala dish is coconut — in all its various forms, including vinegar. The vinegar is actually a byproduct of a locally brewed liquor made from coconut and served in many “Toddy” shops lining the road. Potent stuff, they say, which might explain the carefree, daredevil form of driving practiced around town. If a daylight tuk-tuk trip in the cities of Chennai and Madurai offers more thrills than most rides at Six Flags Great Adventure, you should travel on one at night up and down the steep hills around Munnar.

Starting with classic breakfast fare — idli (steamed rice cakes) and sambar (vegetables cooked in a lentil sauce) — and moving to a dessert — kozhukatta (steamed rice flour dumplings with a coconut and melted sugar filling) — we made five different dishes.  All of this took over five hours, plus the time it took to sit down and eat the completed feast. Neither I nor anyone else expected to be there for almost six hours. In fact, one couple had traveled one and a half hours from their hotel and had a driver waiting outside to take them back. But they stayed for the whole class and they cleaned their plates.

The other dishes we made were rachadi (beetroot in coconut gravy), meen mulagittathu (spicy fish curry, which I had at a restaurant the other day, but this version was better), and kappa kuzhachathu (mashed tapioca).

The most exotic of these dishes was the mashed tapioca. This is the tradition accompaniment to fish curry instead of rice. This required using whole tapioca, a large root vegetable that looks like a sweet potato but is white. I’ve never seen tapioca in this form. That’s not how my mother made that gooey tapioca pudding. And I don’t think I can get that at Gristede’s either. (Has anyone seen tapioca in this form in a store in the U.S.?) To prepare it, it is peeled, cut into chunks, boiled until almost done. The water is drained away, because it’s toxic, and the cooked tapioca is mashed along with a variety of spices and chilis that had been sauteed in coconut oil.

Coconut oil is another essential. In Kerala, when they say cook in oil, they mean coconut oil. And a lot of it. It is also sometimes added at the end to enrich things, like the French might to with a bit of butter. Ghee is also used, but usually only for sweet dishes.

Another special ingredient/technique is “scraped coconut.” Nimi had a little bench with a sharp chisel-like tool sticking out of the end that an assistant spent hours using to scrap fine chards of coconut flakes out of a whole coconut. Later I learned that every household in Kerala had one of these little benches. There’s a technique we couldn’t replicate. I asked what to do instead. Packaged unsweetened coconut, perhaps. Nimi blanched at that idea. She said the coconut meat could be taken out of the shell and ground in a blender or food processor, but “it isn’t the same.” Gee, thanks.

Other ingredients that were used but I’ve never seen:  Jaggery, which is a concentrated block of sugar cane that got melted into a syrup. What to use instead? Dark brown sugar, but “it isn’t the same.”  Garcinia or kudampali, a pumpkin-like gourd that is dried and smoked. I’ve never see this, but I’ve never looked. What to use instead? Maybe tamarind, but “it isn’t the same.” Drumstick leaves, a fibrous stalk from a “drumstick” plant. Never heard of it. Never saw it at Gristede’s. Leave it out, but “it isn’t the same.” Jackfruit, a nearly flavorless vegetable. Although I never heard of it, an internet search shows that it can be found with a looking and it has become a fashionable vegetable source of protein. White poppy seeds, which I have never heard of but seem to be available at specialty shops.

The other key ingredients Nimi insisted be used in all Kerala dishes is fresh curry leaves (using dried “isn’t the same and  chili powder is Kashmiri chili and only Kashmiri chili powder. Although this chili has nothing to do with Kashmir, it is the only chili version used in Kerala. And to use anything else? “It isn’t the same.”

In short, it looks like I’ll need another cupboard for the special ingredients for Kerala cooking. Next stop, Goa and that region’s specialties. Maybe Jo can give up one of her dresser drawers for spice storage.  (JB: No way!)

Incidentally, Nimi has a number of YouTube videos demonstrating some of these dishes. Just Google Nimi Sunilkumar and you’ll find her.

7 thoughts on “Cooking in Kerala”