What a day full of the experiences of India. Our faithful guide Kumar and a driver met us this morning and we sped off to the city of Pondicherry, but not in a direct route. There seems to be no such thing as a direct route with Kumar. No, there were many things we had to see first before we reached our destination.

First of all, a piece of advice for anyone traveling by car – or any vehicle – in India. Assuming you are the passenger, always spend your time observing the world from your side window. Never, never focus on what is happening directly in front of you. Even the most careful driver will be encountering cows, motorcycles, pedestrians, tuk-tuks and other cars coming directly at yours. Much better to be blissfully unaware of the road ahead.

Our first official stop was in Auraville, a French enclave that is a cross between a cult, and…a cult. It’s is India’s only Utopian community, founded in 1968 by Mirra Alfassa (known as “the Mother”) and designed by architect Roger Anger.

“Auroville wants to be a universal town where men and women of all countries are able to live in peace and progressive harmony, above all creeds, all politics and all nationalities. The purpose of Auroville is to realize human unity.”— Mirra Alfassa

Timing was perfect for this sort of philosophy, and the 2,000 people who live here still find it compelling today. Who knew there were so many hippies left in the world? At any rate, it was essential to see Matrimandir, or “Mother’s Temple,” which bears an eerie resemblance to Spaceship Earth at Epcot Center. Guess that aura was being telegraphed back and forth from here to Florida. Only the initiated can go inside Matrimandir itself, but a helpful cutaway is provided at the visitors’ center. 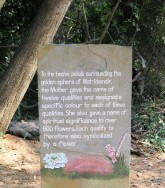 We had to leave as our own auras were getting overcharged, and we were afraid someone would offer us Kool-Aid. This edifice is called by skeptics “the world’s largest monument to gullibility,” but Kumar just calls it “Bulls**t.” You decide.
We did stop for one – and only one temple. Had to draw the line somewhere. 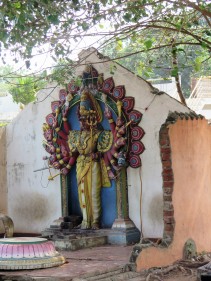 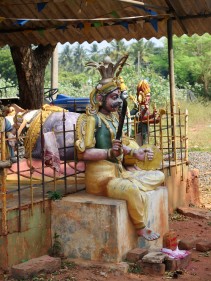 There was a sidewalk vendor selling spiced vegetables, but we thought a picture was perhaps the best way to appreciate her services. Lovely colors. 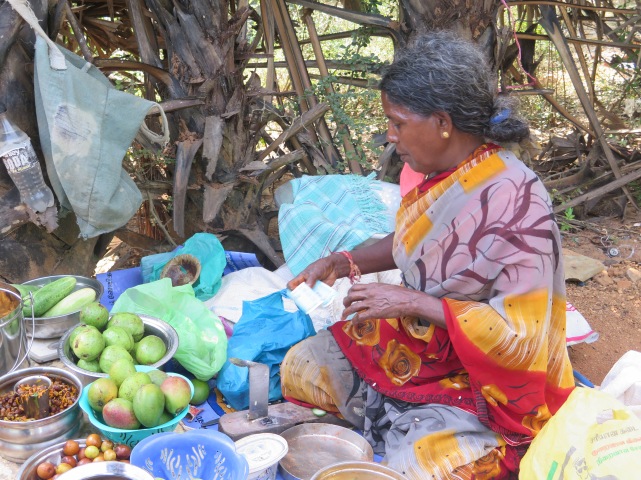 Having had all this stimulation and several hours of travel, we were rather eager to reach our hotel, about 15 km away, but no, lunch must be had. We were taken to a French-ish place on the Bay of Bengal, which was beautiful today. It definitely had a beach vibe, with an added Caribbean mañana attitude. We four ordered our lunch, but only three came. Our waiter seemed to have forgotten there were four of us, so instead of waiting an eternity for our meal, we had to wait two eternities for all of us to be fed.

Yes, I know I should dig deep within and find that inner core of patience, but spending the next hour after our looong lunch searching out an ATM that would actually accept our bank card was maybe just too much. We were very happy to have finally reached our hotel, loaded with Kumar’s warnings about all the crooks in Pondicherry who will rob us blind if he is not around.

This part of Pondicherry is yet another world. We will definitely be absorbing the French colonial era, staying in the re-purposed former home of the French mayor. 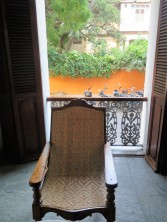 Don’s Food Corner
Today was our last breakfast at the Intercontinental. I almost lost sleep trying to image what the culinary staff was planning as the farewell meal. How could it top the last four days? Well, here’s the photo, so you decide.

Today’s presentation consisted of twelve different South Indian breakfast delights filling eight stemmed sorbet glasses and four rounded tumblers — all spectacularly arranged on a giant banana leaf trimmed to fit a tray. I’m sorry that I can’t name each of the twelve dishes, but they included coconut chutney, a coriander sauce, berry yogurt, tomato sauce, potato curry, two types of pan-fried breads, a deep-fried fritter, coconut “dust” and a melange of spice “dust” to sprinkle on top of whatever else you had selected.

To top it all off was a dish full of gulab jamun, those spongy milky balls soaked in rose-flavored syrup that you always feel guilty about eating when you go to an Indian restaurant. Not only was each offering a masterwork of balanced and subtly selected spices, notice how each was delicately and artistically garnished.

Like the previous four days, this was simply overwhelming. And tremendously welcome. The chef delivered the breakfast along with another chef who we had not met previously. Many photos were taken in celebration of what we were told was a test of best the kitchen can offer. As we told everyone at the hotel, this send off to our three-month tour through India has set a very high standard for the rest of the country to live up to.
But then, if that wasn’t enough, they presented us with a special box of ten hand-made chocolates, each sprayed with a shining coating of silver. 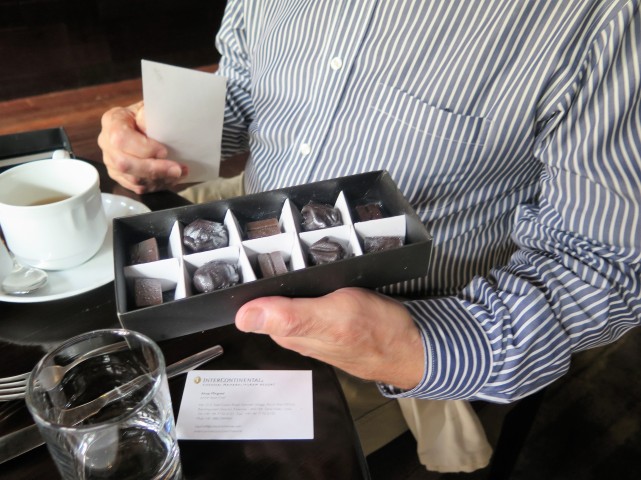 The departure scene when leaving in Kumar’s car featured what seemed to be the entire staff of the hotel wishing us well and begging us to return. We’re still not sure why we were singled out for this royal treatment. We were assured, however, that we would be treated like this wherever we go in India. Well, wouldn’t that be a dream? Maybe we’ve reached nirvana and this is it!
Later in the day, however, we were brought back to earth when we had lunch with Kumar and his driver at a somewhat ramshackle seaside restaurant that billed itself as a French-style restaurant. That was a stretch. We drove around France for six months a couple of years ago and we never encountered anything quite like it.

The specialty here was fresh fish, but the waiter started by telling us all the things on the menu that they were no longer serving. I opted for the catch of the day — a nice sized piece of mahi-mahi with a pesto sauce. Komar ordered the same thing, but after awhile we realized that the waiter had forgotten to put in the order, so we had to wait even longer than we had already waited. There was no attempt to serve everyone at the same time. 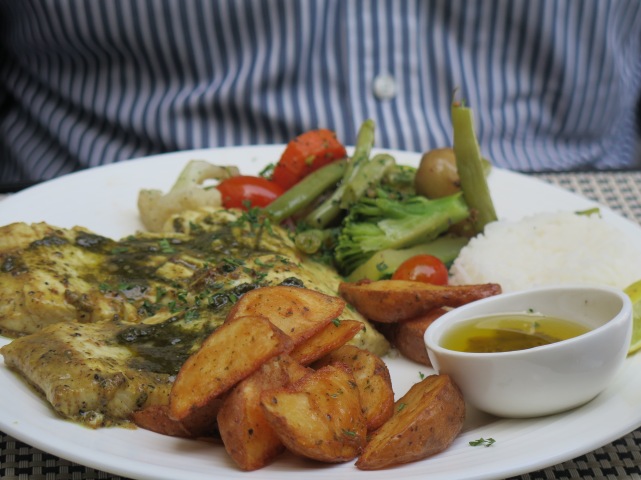 The food arrived as it came out of the kitchen.  First, Jo got her order of shrimp, but then several minutes later the soup she had ordered finally arrived. (It always surprises us here and in other countries, including the U.S., why it takes so long to serve a bowl of soup. Don’t they just ladle it out of a pot of soup already made? Why is that so time-consuming?  And in this case, why was it more difficult to complete than the shrimp? There are so many mysteries in life that I still need to sort out.) 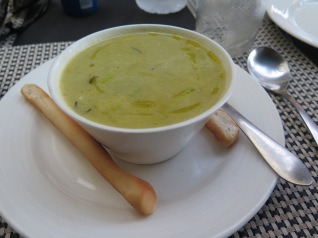 The driver had a piece of sauteed chicken breast that looked kind of leathery, but we’re not sure what he thought of it because he didn’t speak English. Kumar was none-too-happy that they forgot his order. When we left, Kumar lingered behind and we heard some agitated yelling directed to the staff. Very exciting.

Despite this minor setback, I’m looking forward to what we get for breakfast tomorrow. (By the way, I gained five pounds in six days by just eating vegetarian breakfast! A metabolism problem or a volume problem?)