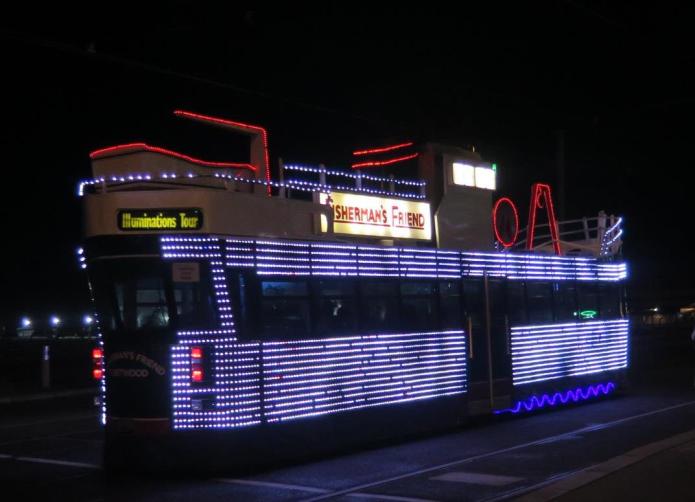 Telling us that often enough convinced us that we had to go. After all, England is more than effete London, serene Dorset and idyllic Kent, right? Right, indeed. We have now explored the other end of the spectrum, arriving in the seaside resort town of Blackpool on the last night the annual light show shining along the full length of the promenade along the water’s edge, famously known as the “Illuminations.”

Much of Blackpool’s growth and character from the 1870’s on was predicated on the town’s pioneering use of electrical power. In 1879, it became the first municipality in the world to have electric street lighting, as large parts of its promenade were wired. The lighting and its accompanying pageants reinforced Blackpool’s status as the North of England’s most prominent holiday resort, and its specifically working-class character.

It’s the last night of the Illuminations here, which means the end of the season, and it’s a bit of a low energy time. But there were still many fun-seekers, strolling on the piers and the promenade. Coney Island, the old Times Square, Las Vegas – it’s a little bit of everything and a lot cheaper than Disneyland.  Before the artificial lights came on, we strolled around to see how things looked under the unforgiving glare of natural light. We spent some time on Pleasure Beach, the ride center of the city. 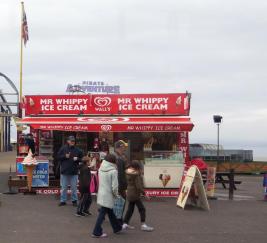 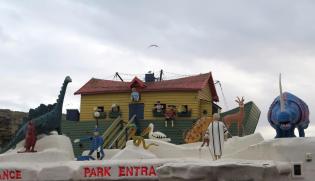 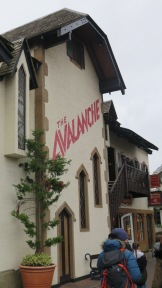 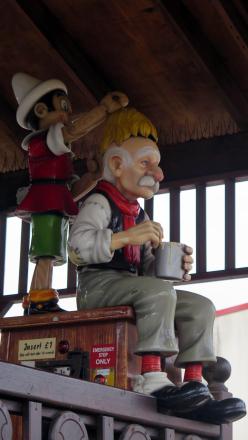 Pleasure Beach has the most amazing number of roller coasters, which seem to intertwine, and which we could walk under and around. Scary! 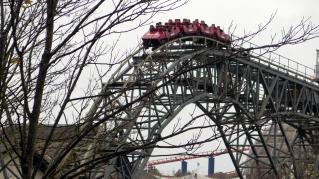 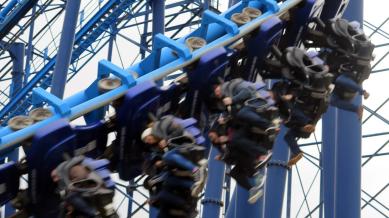 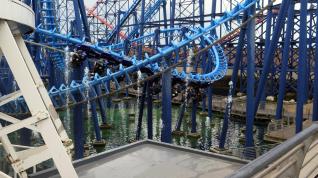 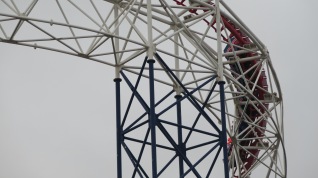 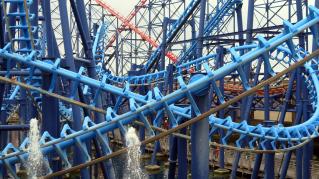 When it was dark and lights were turned on, we strolled along the promenade looking at all the displays, watching the Blackpool Tower constantly change colors. Quite a bit of energy consumed here now, to great effect. 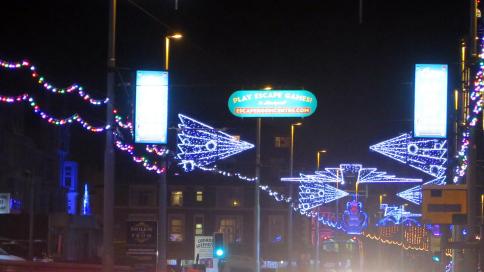 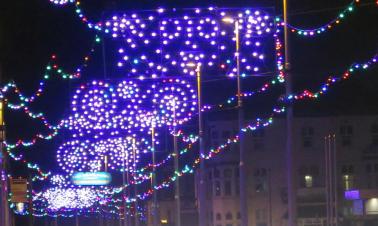 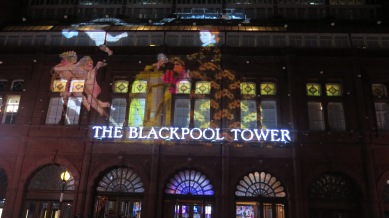 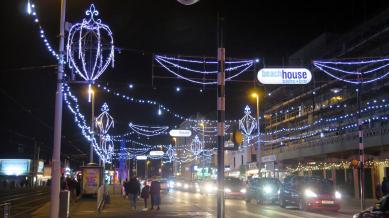 The most evocative part of our walk was on the North Pier, which surely we’ve seen in many films. It was great to have it mostly to ourselves, as we walked way into the waves, hanging over the ocean. 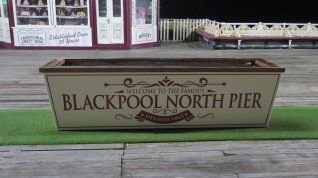 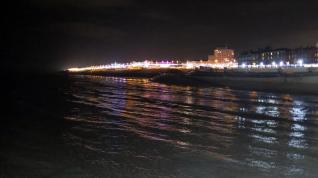 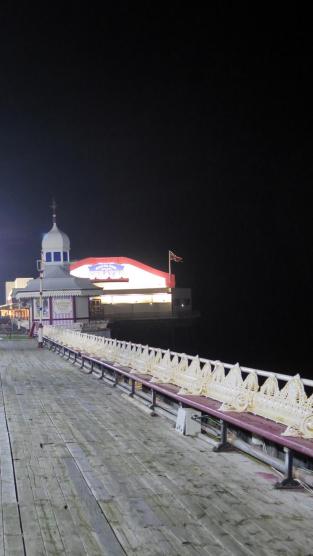 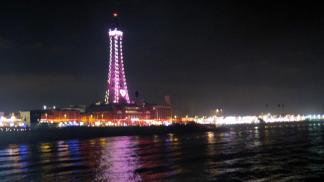 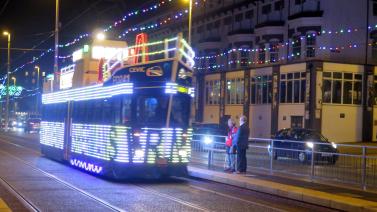 Then it was off to home, which is a major Victorian edifice known as the Imperial Hotel, the northern meeting place of the Conservative Party, many of whose leaders are memorialized in the No. 10 Bar. Charles Dickens was the first celebrity to stay here, in 1869, and many more followed, including us in the present day. It’s showing its age, but we ended up with a nice room with an ocean view. 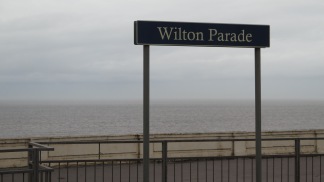 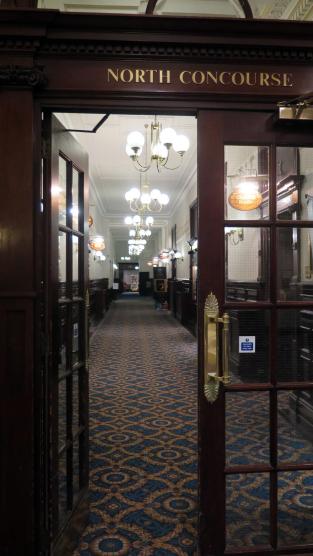 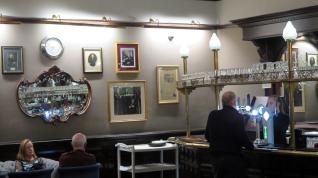 Yesterday, we were in Liverpool on the occasion of our friend Barbara’s 80th birthday party. Liverpool was packed, with several matches, lots of hen parties and general bonhomie. We were fortunate to secure a hotel room just across from massive Lime Street Station, our final stop from London on a very comfortable Virgin train. (The station is pictured from very early this morning, when it was uncharacteristically quiet.) We grabbed a quick pub lunch nearby and then prepared for the festivities.

After meeting the London contingent of June, Alan and their family, we all shuttled up to the suburbs, where the gala event took place. So as not to embarrass the birthday girl, I will limit the pictures, but will just say that Don and I hope that when we’re 80 we will have the energy and joie de vive that dear Barbara has. She never stopped dancing and talking and hugging and smiling and laughing with one hundred of her closest friends and family. It was a super party! 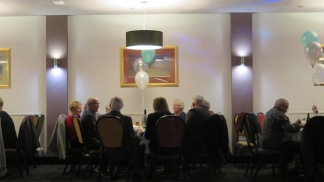 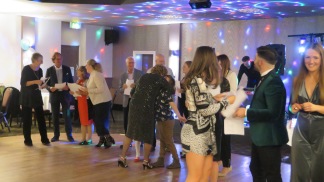 We learned many years ago to be somewhat leery about eating in pubs. It can be a tricky business, ending up with some pretty awful food. We threw caution to the wind, however, for lunch in Liverpool. Directly across from the Liverpool Lime Street train station and equally across the street from the hotel where we were staying was an elaborately-decorated, high-Victorian pub — or, rather, a “hotel” with a pub on the first floor — that seemed to draw us in. Of course, it was certainly the same intention of the original designers of the building to make the establishment as irresistible as possible.

It can be a struggle to order food or anything in a crowded pub of yelling beer drinkers getting themselves worked up to watch a soccer game on the big-screen TVs evident on nearly every wall. Despite these anachronistic intrusions, you could still see the fine carved woodwork and detailed plaster work of this very well-preserved pub. 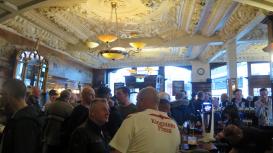 While the menu featured the classics — like steak and ale pie — and some more contemporary offerings — like wraps — we both went for the (usually) trust-worthy fish and chips. There was a little bit of confusion about choosing between “fish and chips” and “cod and chips.” What’s the difference? One difference we found out from a comment made from a local gentleman with whom we shared a table is that we didn’t get mushy peas but instead got only garden peas. We were told in no uncertain terms that the only correct fish and chips plate would have the smashed up mushy peas and not the intact garden peas. We’ll have to pay more attention to these matters in the future.

We were lucky at this pub and got very decent, not-too-greasy and not-too-overly-battered fish. The fish was not overcooked, which can often be a problem. The chips were decent as well. The biggest problem was that the promised tartar sauce was missing. And when we asked for some, we were curtly told that they had run out.

We finished quickly shortly after the anticipated game started and the roar of the pub crowd started getting louder.

2 thoughts on ““Don’t go to Blackpool!” they said”