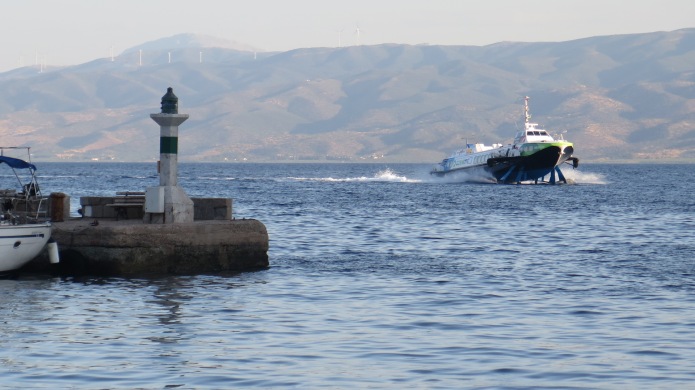 And not in a bad way. We feel that we have done our best by Greece in the last month. Our explorations have taken us to the big cities, the small towns, the major archaeological sites, the most comprehensive museums, and a perfect sampling of idyllic coastal villages.

Today it was time to bid a loving farewell to the island of Hydra, one of the most perfect places to relax we’ve seen yet. We left by high-speed catamaran at 7:20 this morning. That required getting up at 5:30 with the Hydra roosters, to be ready for our luggage service to the port. No donkeys this early in the morning. Instead, a nice man with a big cart showed up to usher our suitcase and bags down to the port. Had we walked it, the sound of our suitcase rolling on the cobblestones would probably have incensed most of our neighbors. 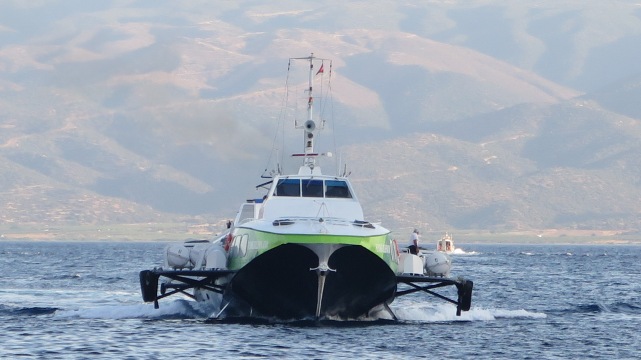 The ship was almost full, and it made its high speed way to Piraeus in 90 minutes. Piraeus is the port of the city of Athens, located about 7 miles away from the city center. It started bustling about the 5th century BC, and a walled highway allowed for the transport directly into Athens of grain, exotic trade goods, and all the other commercial products that were being bought and sold those days. Today, it is the port of entry for the big cruise ships, as well as a multitude of ferries and container ships. 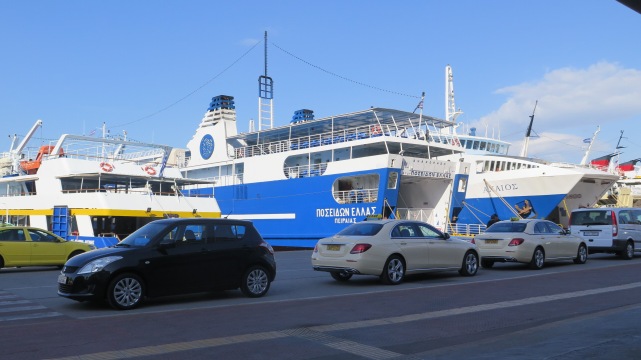 It was a bit confusing for us pedestrians with luggage. Word on the ship was that the metro was on strike, which complicated our travel plans. However, after wandering around looking for a bus, we heard that the strike had just ended at 9:30, which was very considerate of the strikers.

At that point, we wanted to find a taxi to take us directly to our hotel. We found one – and heard a familiar story. “There’s a big demonstration on and to get to your hotel we would have to go so far around the city center that it would cost you 30 euros. Take the metro.” We have learned the hard way that this just meant the driver didn’t want to go to our hotel, and – as there seems to be a demonstration every day in Athens – it only usually requires minor twists and turns to avoid them. Anther driver was much more accommodating and got us there quickly. However, there actually is a general strike of all public service workers today, with a full march planned for this afternoon.

We got to our hotel already exhausted and extremely hot. What a difference it makes not having those cool breezes of Hydra whipping across the town! What to do next? We didn’t want to encounter the demonstration; the sun was beating down; sleep had been short last night.

Time for a nap in our last hotel room. That bed looked so enticing… 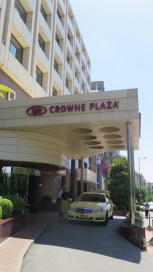 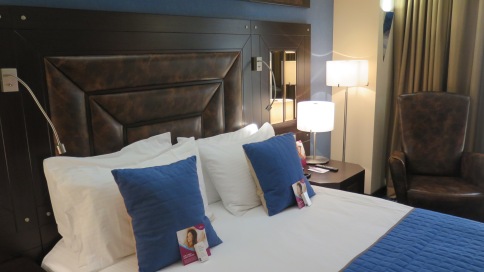 We ventured out for a late lunch – cue Don – and then ambled back home, with firm intentions to do one final sweep around Athens tomorrow.

Yes, tomorrow is another day, our final full day as tourists in Greece.

During our studies of ancient Greek culture prior to this trip, we learned that the central feature in diet of the ancients was meat. And just meat — lamb, goat, pig, sheep, beef. The people who lived near the sea had fish, but they still preferred meat. No veggies, thank you. The meat was always prepared simply – just grilled, usually cut into pieces and put on a skewer before grilling. We’ve seen many versions of old — really old — Mycenaean grills with slots on the edges to hold the skewers so that the meat can be continuously turned until done. (Reproduction shown in action.) 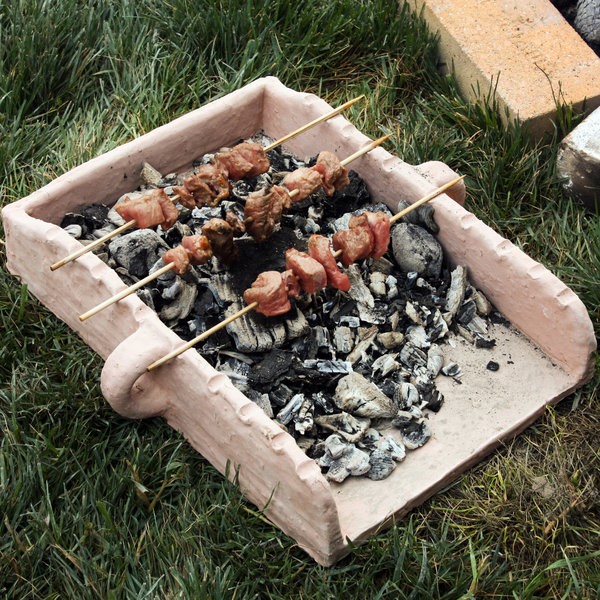 Today we went to a restaurant that specialized in grilled meats, a neighborhood place at the top of some stairs. The ancients most certainly would have recognized what we had. I ordered what was billed as “pork souvlaki.” But there was no pita bread in sight and no yogurt sauce, onion or tomato. Just pieces of pork on a skewer that had been grilled over either charcoal or wood. There was no seasoning, except perhaps some salt, and no olive oil. Just the meat. Nevertheless, it was juicy and tender. The ancients, however, would not have recognized the French fries that came with it. 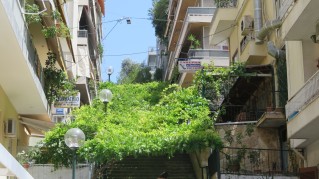 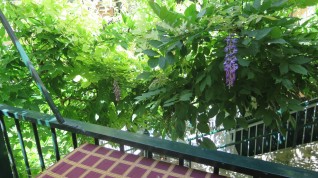 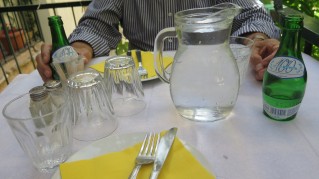 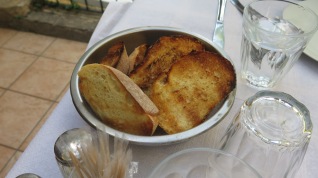 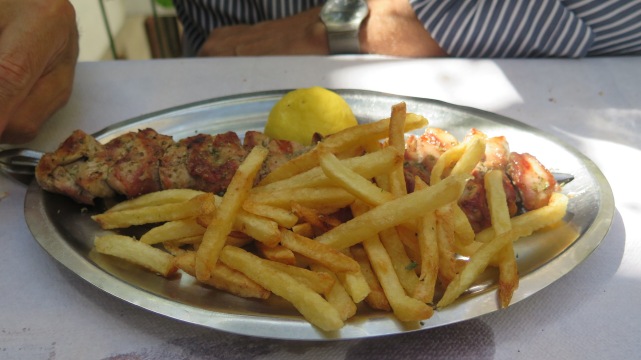 Jo ordered a chicken filet. (There was nothing fancy on this menu like schnitzel!) Like the pork, the chicken was simply grilled — no marinade, no sauce, no seasoning of any sort. It was pretty boring, but like the pork, was not overdone or tough. 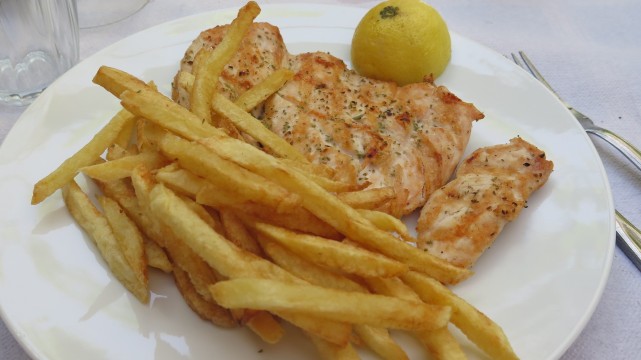 We started, of course, with a Greek salad. The difference at this restaurant was that the portion of feta cheese was unusually large; the tomatoes unusually ripe and juicy. 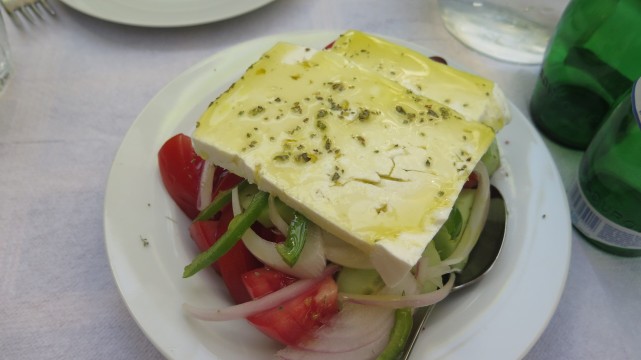 We made a real connection, therefore, with the food as it has been served here for a few thousand years.