According to Homer, Mycenae was the citadel of Agamemnon, who summoned the lesser Greek kings, along with 1200 ships and thousands of men, to wage war on Troy and rescue Helen, the kidnapped wife of King Menelaus of Sparta, Agamemnon’s brother. (Yes, hers was the face that launched a thousand ships.) And this place was one of the sights that helped launch our trip to Greece.

Mycenae had been inhabited since the earliest times. No wonder. Its site is incredibly strategic, between two mountains, and in control of the ancient road that ran from the plain of Argos to Corinth, a key travel and trade route.

The Mycenaeans of the 15th, 14th and 13th centuries BC were quite militaristic. Having taken over the Minoans of Crete, they were the leading power in Greece, but then suddenly disappeared by 1100 BC.

The site of this citadel was ‘discovered’ by Heinrich Schliemann, fresh from his excavation of Troy. When he began digging in 1876, the only clearly visible landmark was the entrance to the fortress – the Lion Gate, the main entrance to this closely guarded fortress. While the lionesses are missing their heads, you can still imagine how impressive the gate must have been.

There are astonishingly large stones lining the entrance and the fortification walls of the site. The ancient Greeks of 1000 years later assumed these boulders, each weighing 5 to 10 tons each, must have been moved by the legendary Cyclops, rather than by the same technology that built the pyramids. They certainly are impressive, and they are still in place. 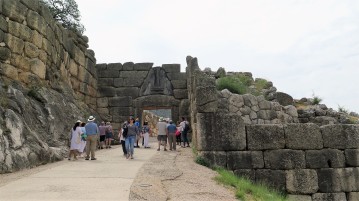 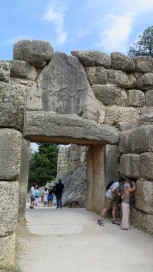 Once inside, we see the famous shaft grave circle, Grave Circle A, which Schliemann excavated with great success. This predates King Agamemnon by about 300 years, but he was convinced he had uncovered the tomb of King Agamemnon, as that would fit so well with his discoveries at Troy.

The treasures he found in the tomb – about 30 pounds of gold goods – are spectacular, including what Schliemann called the “Mask of Agamemnon.” (We saw it in the museum in Athens, along with its highly suspect mustache.) No matter whose kingdom created all those treasures, it is clear there was a highly refined culture resident here, along with examples of Linear B writing, which were eventually translated. 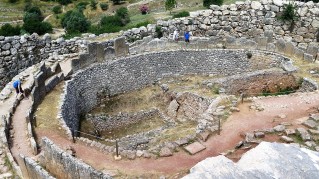 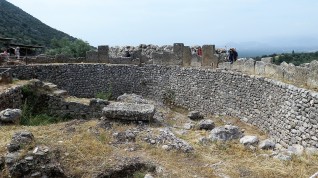 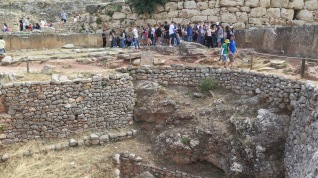 At the pinnacle is the royal palace, from which the kings of Mycenae ruled. A large open-air courtyard leads to a covered porch, then a small anteroom, and finally to the throne room, the Megaron, currently with a shed protecting something. If you believe the ancients, it was in this great hall that the Trojan War was plotted. When you see the view they must have had, it might have seemed a simple matter to conquer another kingdom. 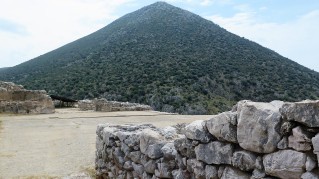 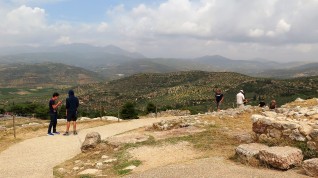 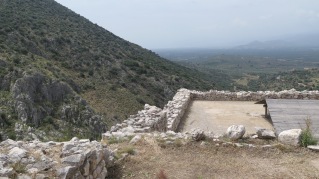 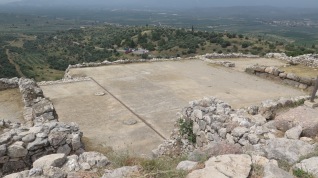 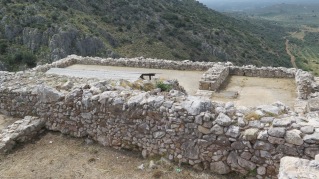 And the view is just spectacular. The city has two mountains on either side and steep ravines leading to fertile plains beyond. It was the perfect defensive position, and lovely to boot. 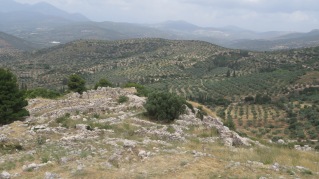 One of the Mycenaeans’ great accomplishments is the cistern they built to provide water in case of siege or drought. There are 99 steps leading to the secret spring. (Don made it half-way, which is not at all shabby considering he was carrying a flashlight and a camera.)

There was a secret back door built into the far eastern end of the complex, along with a North Gate, through which we exited to the museum. Amazing builders, those Mycenaeans. 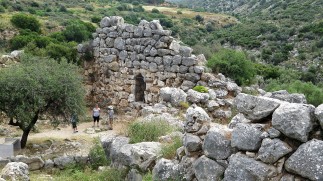 For those who can’t get to Athens where all the goodies are, the museum here offers reproductions of the gold artifacts and a sampling of the pottery representing all the ages of Mycenae. They indeed lived an artful life. 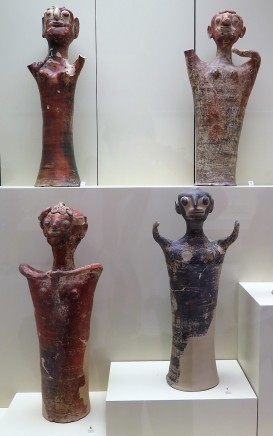 One last sight was the Treasury of Atreus. Beginning in the 15th century BC, royalty were buried in massive bee-hive shaped underground chambers. The grand chamber most likely holding Agamemnon’s father, Atreus, is massive. The lintel over the doorway is 26 feet across and alone weighs 120 tons. The chamber is round, 47 feet in diameter, and 42 feet tall. Truly fit for a king. 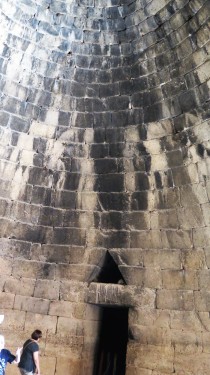 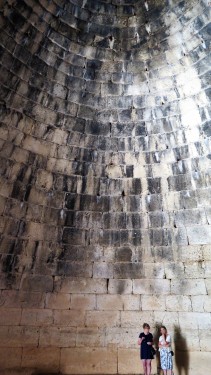 The city on a hill is quite magnificent. Homer wrote about it; we finally got to see it. One of our top sights ever. 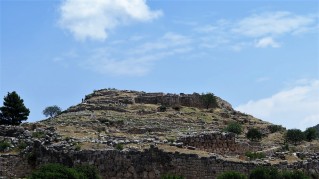 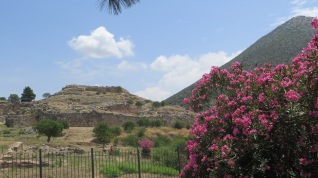 Mycenae took our breath away, but not our appetite.  On our return to Nafplio, we had a late lunch in a tiny restaurant on a quiet side street in this truly beautiful small city.

A special of the day was octopus stewed in a tomato sauce, rich with onions and peppers. Memorable. It came with large portions of rice and spinach. 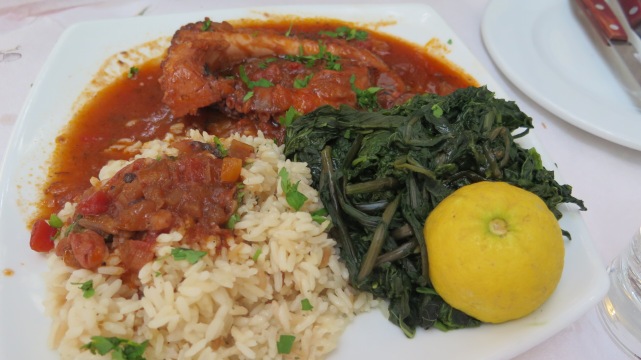 Although schnitzel was on the menu (!), Jo decided to go local and ordered shrimp saganaki in a cheese and tomato sauce. Despite assurances by the waiter that the shrimp would be shelled and not have their heads attached, the dish arrived with the shrimp in their full-body armor. Jo was able to navigate around the shells and heads. The shrimp themselves were incredibly sweet and the sauce was hearty and rich. But I think she’ll be leaning toward more schnitzel in this last week we have in Greece. 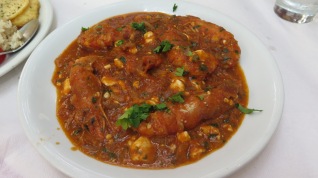 We also shared a Greek salad, of course. This restaurant served the salad with peeled cucumbers, which is about the only nuance of difference from one place to another. Peeled or unpeeled cucumbers. Still, as simple as this dish is, it can taste completely different every time you have it. It’s clearly all in the quality of the ingredients.