This morning we traveled by train from Salzburg to Innsbruck, through some beautiful countryside where the forests were often covered with solid ice and snow, making the scene truly a winter wonderland.

On a Sunday afternoon, not a lot was open in Innsbruck, except for the cathedral of the great outdoors. We started on a funicular, and then, along with 93 other people, we squeezed onto a smallish cable car to the second level of the nearby mountains – high enough to have a gorgeous view, but not quite nosebleed territory. Thank goodness we rehearsed for this ride on New York’s D train – which can be just as packed, minus the skis and related paraphernalia, which added an exciting and sometimes painful dimension.

It was a sunny day, and oddly warmer up on the mountain. Half of Innsbruck seemed to be enjoying the wonderful snow, the incredible views, and winter sun. Not for the faint of heart. 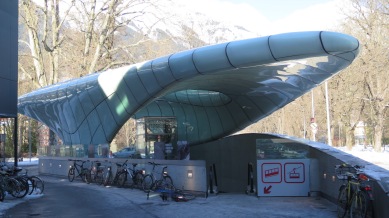 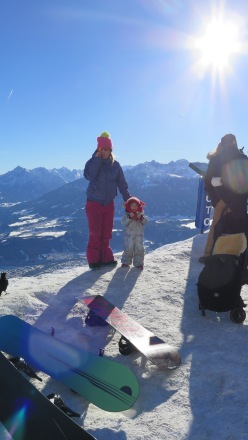 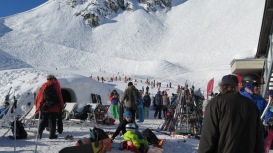 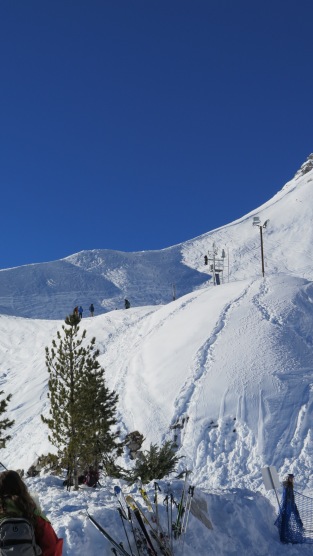 We took a little time to explore our neighborhood too. Once again, we are in an historic Austrian inn, the Golden Eagle. Dating back to 1390, it has hosted a who’s who that includes Mozart, Goethe, Camus, Sartre, etc. etc. And now it has us, in a lovely room near the town square. From our vantage point, we can see the famous Golden Roof, built by Emperor Maximilian I to look out over the square. The balcony (1494) is topped with gilded copper tiles. Can’t wait to see it in the sun. 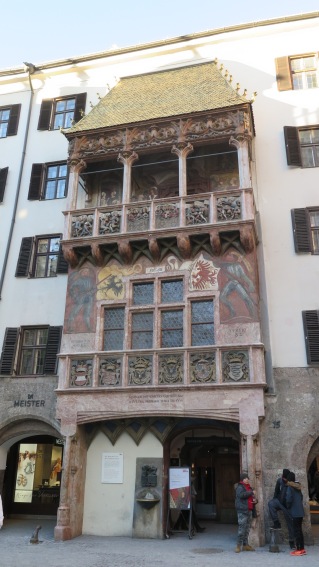 The Old Town is highly decorative and somewhat different than Salzburg – more German, I guess. Interesting to see that they clean all the sidewalks and pedestrian areas here – very unlike Salzburg, where it’s each man for himself. But both have a delightful custom of putting a pole next to a building to alert you that huge chunks of ice are frequently descending from the roof. Always good to be warned. 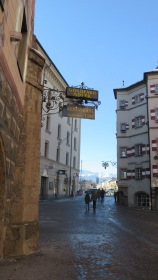 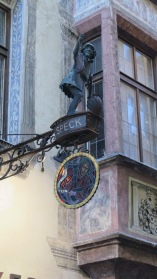 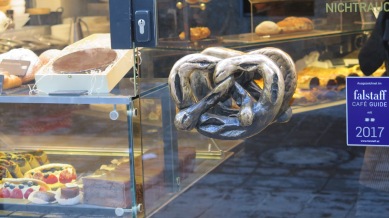 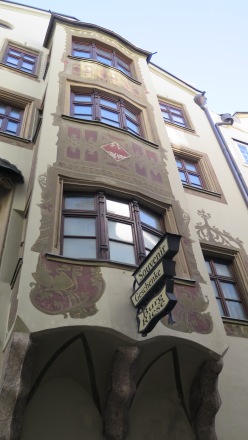 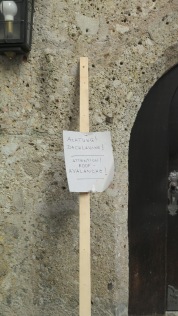 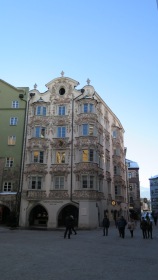 The one place I had picked out to eat that was to be open on Sunday turned out to closed this week. The owners went to Florida?

But, happily, there was another “traditional” Austrian restaurant across the street that was open. And, like every other traditional Austrian restaurant we’ve been to, it had the same menu, with a few minor differences.  That means Jo had the wiener schnitzel. She declared the quality as good but not as good as the best she’s had on this trip — which is about the best she’s had in a lifetime of wiener schnitzel tasting.

I went for a platter of sauerkraut with a medley of smoked pork products piled on top. A very heavy dumpling and a little puddle of grated horseradish rounded out the very hearty dish. However, like yesterday’s butter meal, I’m not complaining. 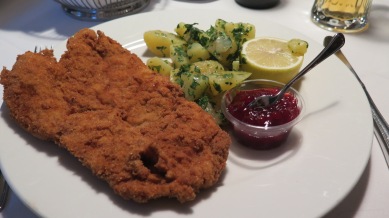 We started with a bowl of goulash soup. Every restaurant has its own recipe variation on the soup; today’s was less gravy-like than what we’ve had previously.

We were about the only tourists in the restaurant. It was filled with groups of locals — mostly families who seemed to have just come down from the mountain — digging into this food after careful consideration of the same five or six choices seen in every restaurant. Their eyes lit up when the food arrived, as if it were a new culinary adventure. No food boredom here.