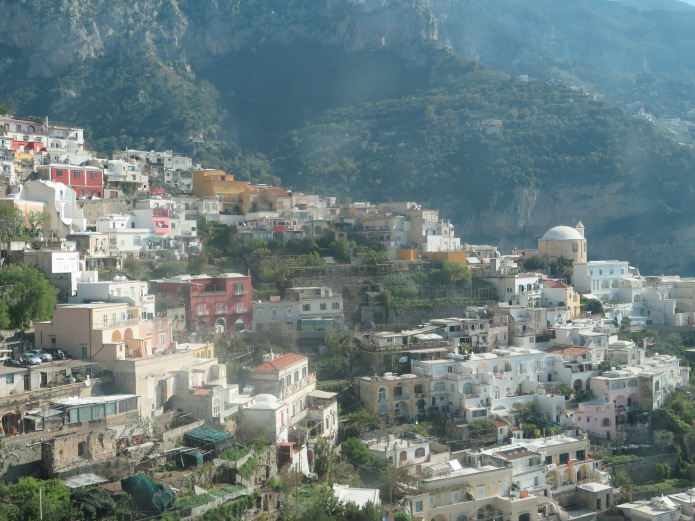 Why squeeze too much in one day, we thought. The weather is gorgeous and we have time to relax. So today we only visited one of the towns on the Amalfi Coast – Positano.

We took the local bus from Sorrento, which was surprisingly luxe and comfortable. Don insisted I get the view of the bay from my seat. That was nice, but then I also got an up-close and personal view of the precipices over which we were hurtling. Our driver seemed determined to keep to his schedule, and some hair-raising confrontations with major tour buses headed for Sorrento ensued.

But we were flung into Positano right on time, and emerged at the top of a short hill leading down to the center of the city. There is not a whole lot to say about this ancient city, except that pirates were a recurring problem. It did well in medieval times, and is clearly thriving now as a tourist destination. The pictures tell the story of its beauty and charms better than I might. 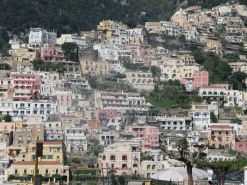 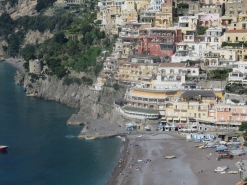 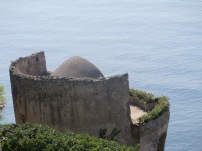 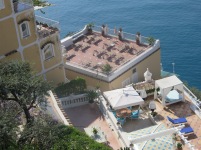 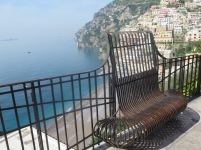 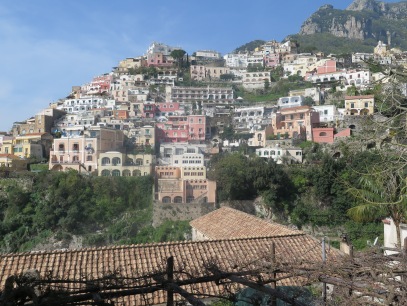 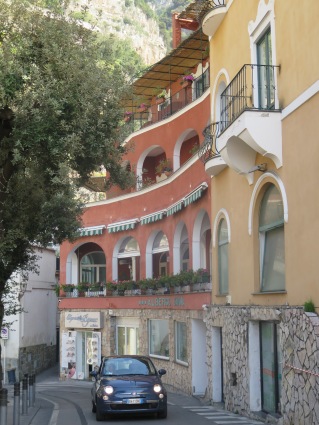 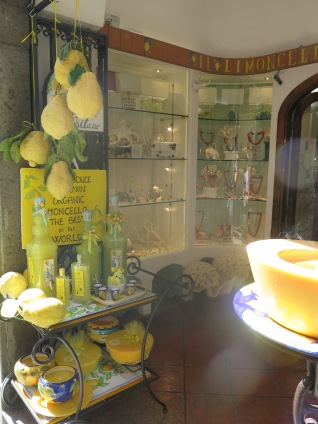 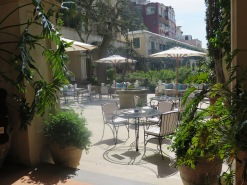 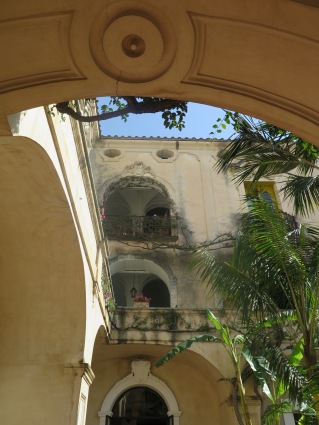 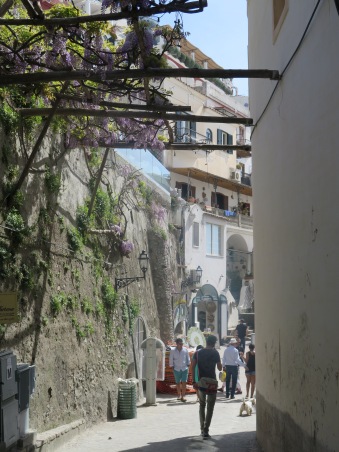 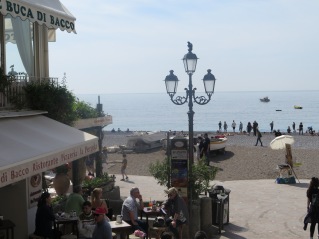 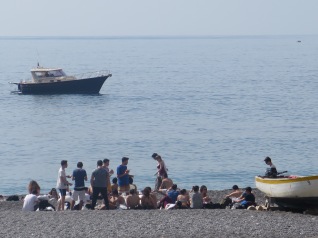 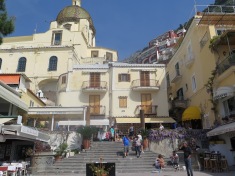 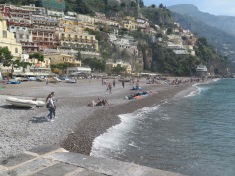 And here is the legend of its name: The church of Santa Maria Assunta features a dome made of majolica tiles as well as a thirteenth-century Byzantine icon of a black Madonna. According to local legend, the icon had been stolen from Bzantium and was being transported by pirates across the Mediterranean. A terrible storm had blown up in the waters opposite Positano and the frightened sailors heard a voice on board saying “Posa, posa!” (“Put down! Put down!”). The precious icon was unloaded and carried to the fishing village and the storm abated. It now hangs over the altar of the church. And so now we know.

Based on my policy of trying to steal only from the best, let me share what John Steinbeck said about this town in a lovely essay published in Harper’s Bazaar in 1953. It is worth visiting, just like Positano.

“Positano bites deep. It is a dream place that isn’t quite real when you are there and becomes beckoningly real after you have gone. Its houses climb a hill so steep it would be a cliff except that stairs are cut in it. I believe that whereas most house foundations are vertical, in Positano they are horizontal. The small curving bay of unbelievably blue and green water laps gently on a beach of small pebbles. There is only one narrow street and it does not come down to the water. Everything else is stairs, some of them as steep as ladders. You do not walk to visit a friend, you either climb or slide.”

And everything he says about the horrors of Italian traffic is still true today. But tonight, we will dream of Positano.

Like yesterday, the restaurant I had picked out for our major meal of the day hadn’t opened for lunch for the season yet.  Once again, we threw ourselves at the mercy of TripAdvisor.  While not a number-one rated place, we chose the closest one on TripAdvisor with the highest score; the stairs and steep streets of Positano were getting to us.  It turned out to be a fine choice.

We started with delicious bread and an appetizer of stuffed zucchini flowers.  The stuffing was a creamy combination of ricotta and mozzarella, lightly seasoned with fresh herbs (basil and marjoram, I think). The whole stuffed zucchini flower was then breaded and deep-fried in a beignet-style manner. Very light. When you cut into the encased fried flower, the interior cheeses actually squirted out. Nothing greasy about it. It came with some more of those incredibly ripe cherry tomatoes that seem to be standard everywhere we go. In this particular case, they were halved and had been roasted to perfection, making the tomato richness even more flavorful. A perfect starter. 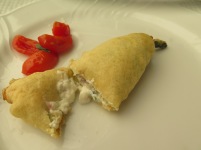 For a second course, Jo selected lasagna, which was a featured special of the day.  It was prepared as a single serving.  The pasta layers were almost as thin as filo dough sheets.  An usual feature was a layer of sliced hard-boiled eggs.  Another layer was tiny, pea-sized meatballs.  An interesting and delicious take on this classic.  We’re not sure if we were looking at a regional interpretation of the dish or something unique to the restaurant.  In either case, it was a winner. 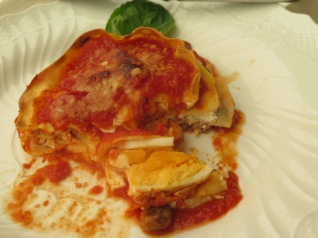 I went with rigatoni, Naples style.  That meant rigatoni in a tomato sauce with meatballs and sausage.  The meatballs were almost as light and fluffy as the cheese stuffing in the zucchini flowers. The meat was very finely ground. They almost had the texture of quenelles because, although they were covered with tomato sauce, I couldn’t detect any crust on the exterior that would have indicated they had been fried or baked.  Poached somehow?  The small sausages had strong fennel flavoring, making them the strongest flavored feature. Interestingly, while the whole dish melded nicely, there were little surprises (like that fennel punctuation) with each bite from different areas of the dish. 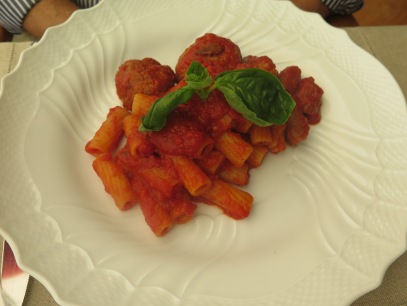 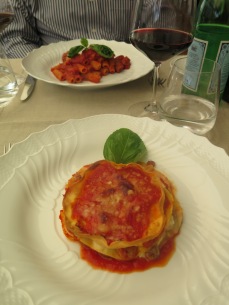 OK, I hate to admit it, but another positive experience from a TripAdvisor recommendation. I usually mistrust it because the ratings come from a consensus of non-expert diners instead of more reliable opinions of professionals.  Maybe reviewers of the food here are more discerning? Let’s hope the streak continues…

4 thoughts on “Working our way down the Amalfi Coast”