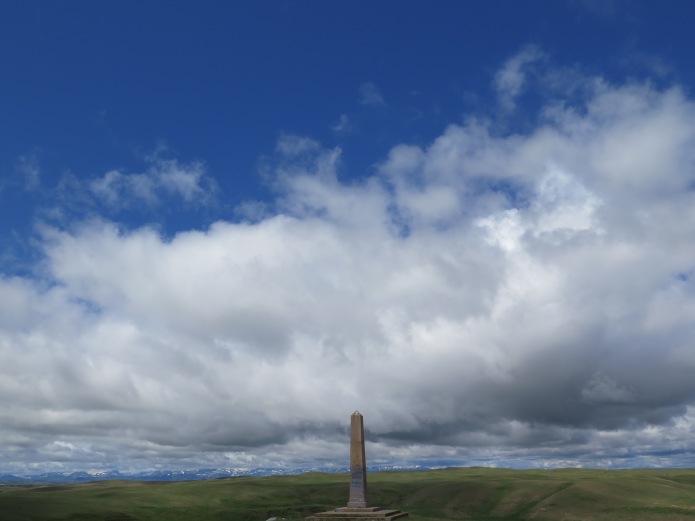 And that is exactly where we traveled today.

We left Kalispell with an awesome view in front of us.  In ascending order, the beautiful fields, the clouds, the mountains – and then more clouds.  We have never seen anything quite like it. 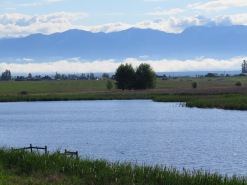 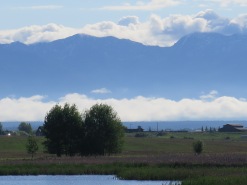 We headed east, back to Glacier National Park and then beyond it, on gorgeous scenic Route 2.  The views through the mountains were spectacular vistas, with rushing waterfalls, lovely Ponderosa pines and great ups and downs on the road.

We crossed over the Continental Divide, and all the streams started rushing to the Mississippi, rather than to the Pacific.  You can see the change in directions and it’s very dramatic. And then – suddenly – we were on the east side of these mountains, called the Rocky Mountain Front, and on the Great Plains. This is actually what they consider the Big Sky country, and we could indeed see for miles and miles – with horses to boot. We stopped to look back at where we had come from, and it was quite a contrast. 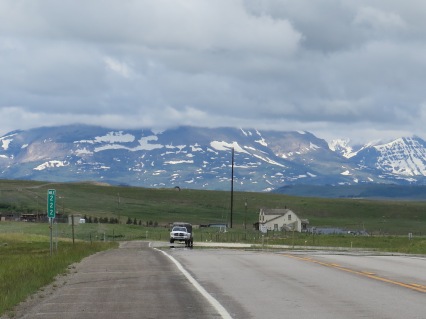 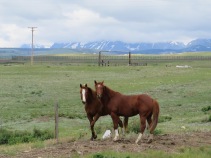 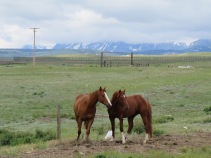 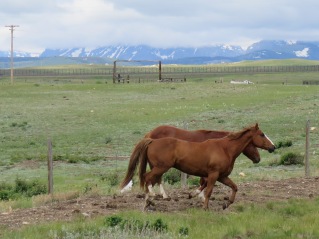 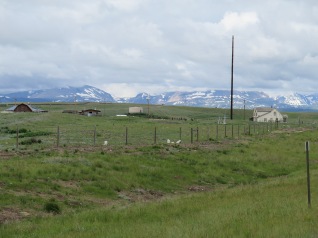 Our first stop was the town of Browning, on the Blackfeet Indian Reservation.  We toured the Plains Indian Museum, which did not allow photographs of its collection of native clothing and artifacts.  The man at the front desk was a Blackfoot Indian, and a well-traveled one.  He had worked in IT, went to school in San Francisco, has a home in Seattle, has done a lot of work in New York with the finance industry, and lived for several years in Pimlico while working in London. He’s back in Browning “taking care of some tribal initiatives.” Very impressive guy.  We talked a lot about Monument Valley, as his (ex)wife is Navajo and he has taken his sons there many times.

I wondered out loud what it must be like to get up in the morning and see these incredible landscapes.  He said, “Well, the first thing you do is go outside and shoot off your shotgun so that the grizzlies know you are up and to stay away.”  That gave me pause. I assume he didn’t pick up that habit in London.

Right in front of the museum is a prairie dog habitat.  Cute little things, but I can understand why you wouldn’t want them digging in your yard.  And I guess you can’t have just one. 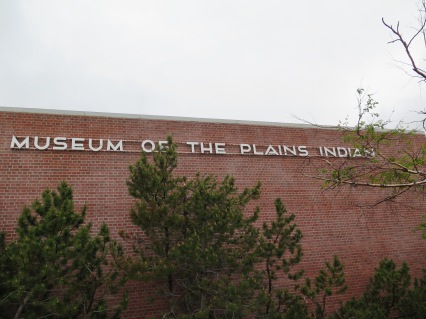 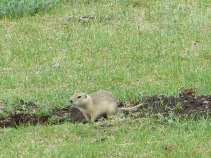 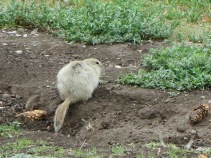 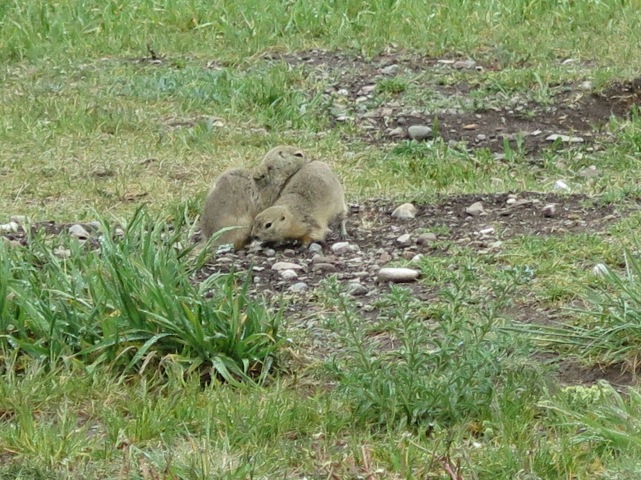 We wandered down to the trading post for some possible souvenirs, and they let me satisfying my picture-taking urges there.  Just for the record, we now have a rope of sweet grass in our car, hand-braided by the lady at the cash register.  Guaranteed to bring us good luck. 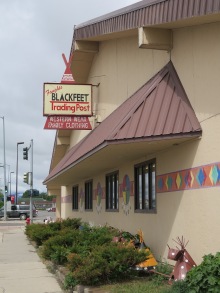 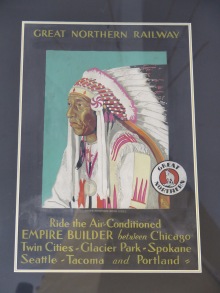 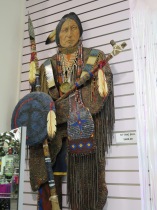 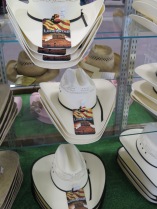 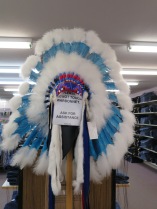 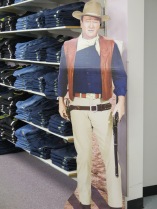 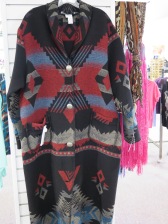 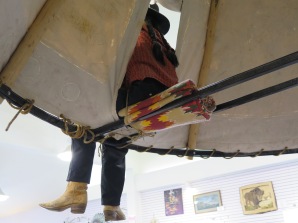 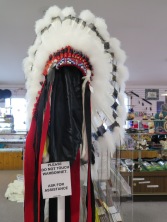 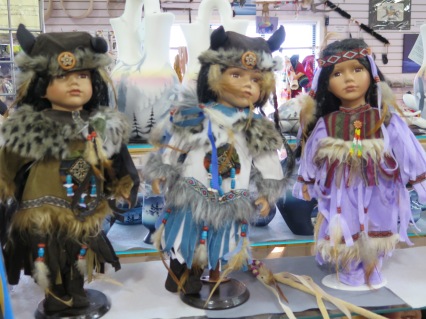 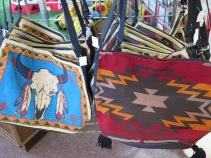 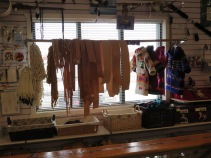 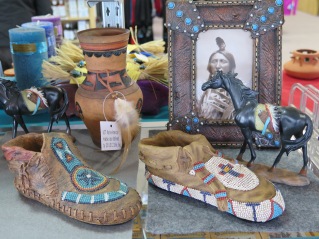 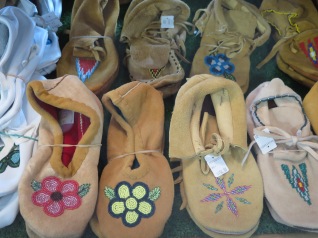 One stop of note was at the monument commemorating the passage of our friends Lewis and Clark at what they called Camp Disappointment, about four miles from here. They realized that they had reached the end of what was the Louisiana Purchase, because of the change in the flow of the waters.  But they persevered, despite a lack of game, and what ultimately became their only armed struggle with the Indians.  It seems they thought to get big points with the Blackfeet by mentioning that Great White Father Jefferson planned to give guns to all of the Plains Indians.  Little did they know that the Blackfeet had a monopoly on the arms trade, being part of the Hudson’s Bay cartel.  Blackfeet not happy.  Stole the Corps of Discovery’s horses.  Gunfire ensued. Two Blackfeet die.  Uh oh.

But the railroad eventually installed this monument in their honor, which evidently is a destination parking spot and grafitti opportunity for the local youth.  Everything has a purpose. 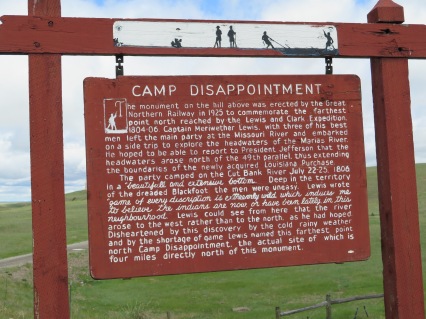 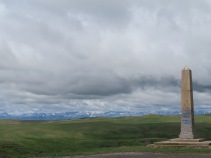 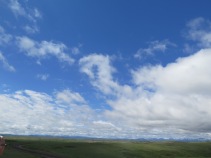 We had lunch in the little town of Cut Bank, which has one of the major ports of entry to Canada,  just a few miles away.  This does seem to be the middle of nowhere, though they do have a better grocery store than we do. Naan or croissants, anyone?

Now we are in the town of Shelby, getting ready for new Montana adventures tomorrow.  Maybe we’ll see more wildlife, though today’s prairie dogs were pretty exciting…