Or at least our luggage did. We are on the island of Hydra, where there are no cars or motorbikes. Want to get your luggage to your hotel? Rent a donkey or two and then follow the poor things up the hills and around the corners. The donkey master kept trying to encourage me to ride up the hill, but that just wasn’t going to happen, in these days of social media. 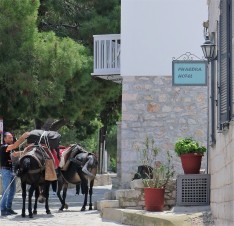 Our modes of transport today began with a cab from our hotel in Nafplion to the port in nearby Tolo, where we boarded an excursion ship which takes tourists to two islands and returns back to Tolo later today. It’s a mini island-hopping vacation for those who can’t get to Santorini, I guess. Tolo looks like a lovely resort town, smaller than Nafplion. 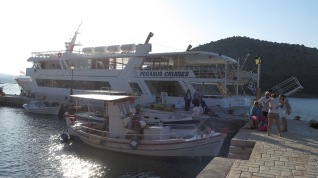 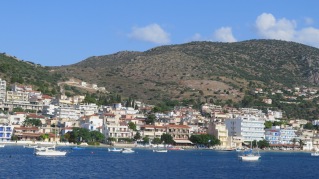 Lucky for us, Hydra was the first stop, where we arrived after a three-hour ride. It was spooky to think that our boat was following the same route that the naval battalions of the Greeks took to reach Troy. It must have been chilling to look out and see a thousand enemy ships coming your way.

For us, it was mostly just sun and water, with an occasional passing island.

Having gotten our luggage safely home in the Hotel Phaedra, which we like very much despite the negative connotations of the name.

The first course of action was finding a nice restaurant for lunch. Afterwards, we strolled around the town a bit, enjoying the quiet once our own ship left and other tourists dispersed. Lots of friendly cats, donkeys, and tourist shops. 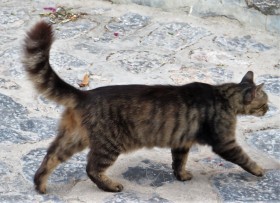 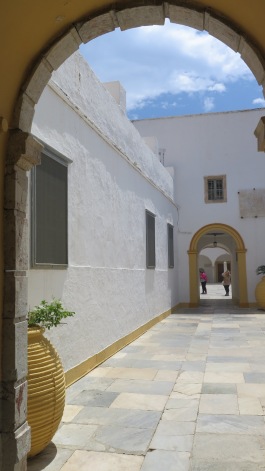 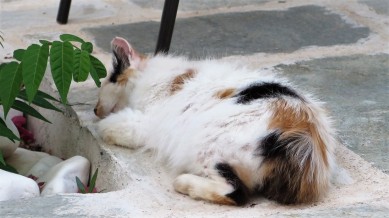 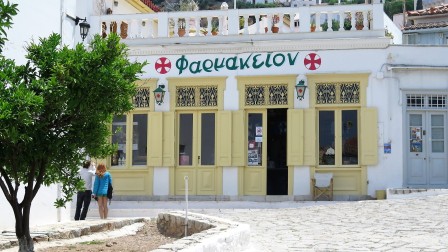 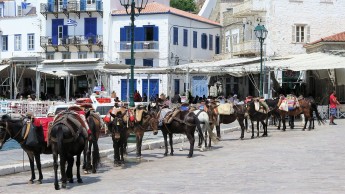 Later this afternoon, the hotel was the site of a wedding party. I spied from our porch and got to watch them depart for… the church? The reception? Just hope the name of the hotel is no bad omen for them. Rumor has it that the bride is a nice English girl marrying a nice Greek boy.

The restaurant where we had lunch was not directly on the harbor, but on a terrace overlooking it. 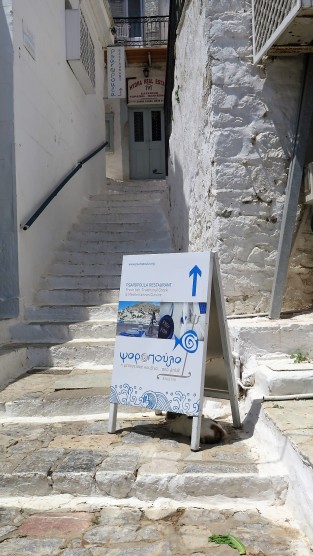 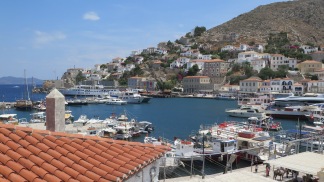 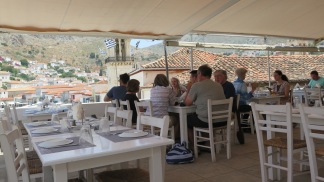 Octopus was on the menu, so I naturally had to try it — grilled, of course. Tender and juicy and grilled in a combination of the ubiquitous Greek olive oil with a bit of lemon juice emulsified in. Great. And look at the size of those tentacles.

Jo found schnitzel on the menu. (The global taste test continues.) This time it was chicken schnitzel with a side of rice. 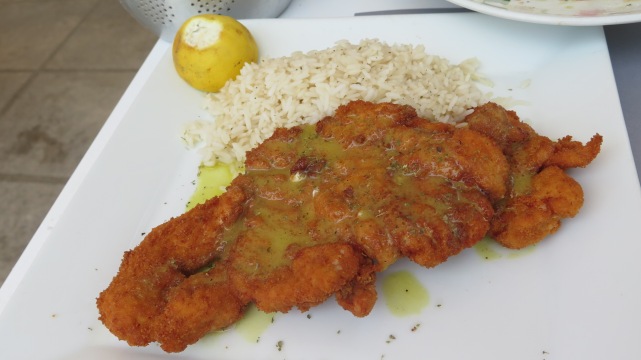 We shared a “Cretan” salad, which differs somewhat from Greek salad because it features a soft Cretan cheese instead of feta. Plus, it always has bread either on the bottom of the platter or tossed in the salad, somewhat like an Italian panzanella, but with a dressing of olive oil alone.

A very nice meal in a very delightful setting.

Later we stopped at a bakery for a tea, an espresso and two huge portions of baklava, which as we’ve elsewhere in Greece, comes not with many layers of filo soaked in honey, but rather a dense walnut mixture soaked in honey and wrapped in only a few layers of filo. Despite this critical difference, we managed to polish it off, watching the donkeys go by.

2 thoughts on “We travel first-class”