We left England for a slightly smaller island today – the mysterious Isle of Man. It seemed mysterious to us, at least. We were hoping to see a whole lot of Manx kitties and taste some fabulous ice cream. So far, we have found ourselves in the middle of a motorcycle rally – the Southern 100. For over 100 years, there have been races here, and this is just one of those scheduled this year. The International Isle of Man TT (Tourist Trophy) Race is a really big thing, if you are into motorbikes, we have learned. We suspect the cats are staying out of the way of the bikes, as none have been spotted yet.

Lots of participants – or maybe just fans – came over on the Steam Packet with us. This is a huge ferry that goes from Liverpool to the town of Douglas here, taking about three hours. It was a very smooth crossing, even though we left in a heavy rain. But we did get one more look at the Dazzle Boat in Liverpool. 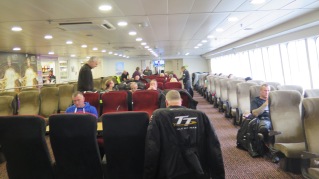 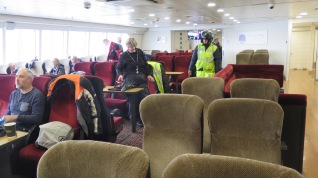 When we arrived, the sun was shining and it was a lovely cool day. We got to wave goodbye to the ship as it returned to Liverpool.

Between the Celts, the Romans, the Vikings (almost everyone here has blue eyes!), the Norwegians, the Scots, the Irish and the English, the island has had a lot of visitors and rulers. Today it is an internally self-governing Crown dependency, with its own language and currency. Tourism was huge here during the Victorian era and the early 20th century. Evidently it’s not what it was, so the motorbike events seem to dominate the tourist activities. It’s easy to see the lovely remnants of the sea-resort era along the beachfront promenade. 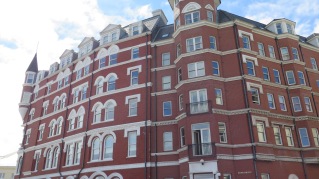 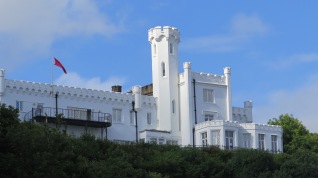 We strolled through the main shopping area and, while it’s not the poshest town we’ve visited, we found all the basics, including Boots and Marks & Spencer. What more does one need? 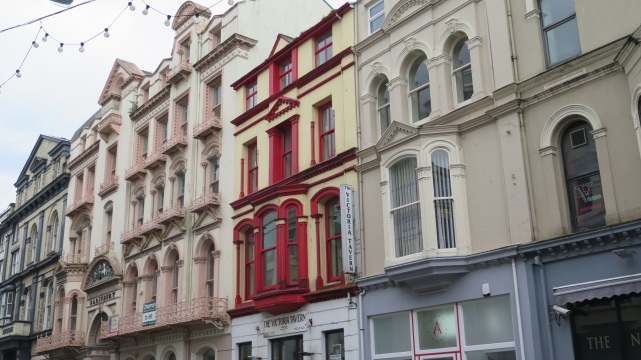 After a hearty buffet breakfast at the hotel this morning, we took nothing to eat on the ferry over to the Isle of Man because we assumed we would find somewhere that would serve us a “proper” tea in Douglas — with savory sandwiches and an appropriate array of sweets. While we have enjoyed some great cream teas in shops and even more impressive and greater full teas in the homes of our generous friends, this was our first commercial experience since we landed in the UK.

The recommended place (The Tea Junction!) was perhaps a tad self-conscious, but it delivered, with little sandwiches and sweets on a three-tiered display tray. The tea came with little timers that supposedly showed you how dark the tea would be at any moment so that you could halt the brewing when it reached your personal preference. Precision brew time!

The savory part of the offerings were egg salad and tuna salad sandwiches as well as some tiny ham quiches. The sweets included scones (with clotted cream and jam, of course) along with two kinds of cakes, a macaron and a chocolate candy type of confection.  Then, just for the cuteness of it, miniature ice cream cones filled with clotted cream and topped with a single raspberry for each cone.

As has been our policy throughout Italy and now the UK, we cleaned our plates to show our appreciation and not to appear rude. I think tomorrow will be another day of a display of these good manners.

P.S. Jo wants me to point out that this tea shop had a row of lead crystal decanters turned into hanging light fixtures. Great idea, since we know you can’t really drink out of them anymore.

3 thoughts on “Another day, another island”