Today is a travel day for us – time to leave Bologna and head on to Siena.

We have stayed a full week in an apartment here, and we were a bit curious about the history of our building.

We learned that it is on one of the original Roman roads, now known as via San Felice. The first building wall was put up in the year 1000. Five hundred years later, the medieval builders fell in love with porticoes, which are all over Bologna, and erected the one we have on our street. They additionally modified the front of the building to conform with the portico.

In the 18th century, the building was expanded to create a back staircase leading to what is almost a separate building. We are in that section. Our apartment has been modernized, and, while not quite our taste, has been a very comfortable home for this week. It’s cool and quiet –  but not so quiet that you can forget you have Italian neighbors. 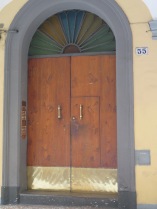 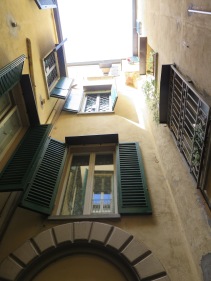 Our favorite part is the little nook that serves as an office and which overlooks an interior garden. It was wonderful to work here and take in the view. 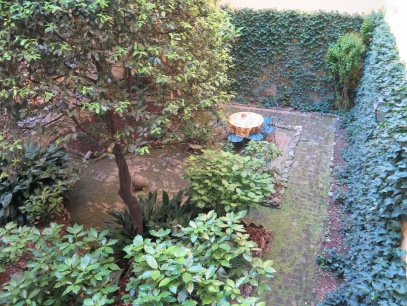 Fast-forward a few hours and we have now traveled to Siena, another city that hasn’t seen us for 35 years. We have a lovely room in a 13th-century convent attached to the house of Saint Catherine of Siena. The building is still in part an active convent. Our section has been remodeled into a lovely hotel with knock-out views of the Duomo and rooftops of Siena. Simple, but with nice touches, our room will have us staring out of the windows or standing on our little balcony when we’re not sleeping. (No points from this stay, but maybe a few blessings come with it.) 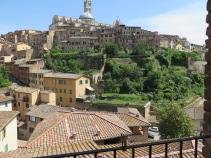 The cab from the station only got us so close to the monastery. Our hearts sunk when we saw these steps, but fortunately the entrance is only about a third of the way down. Lots of style here – even in the rec room.

We’ll be enjoying some modern creature comforts combined with some tasteful more period touches. And there is great air-conditioning. (It’s a day that really calls for it – and it’s the best we’ve had so far on our trip.) Hallelujah!

We didn’t expect this would be much of a food day — a morning doing laundry and most of the afternoon on a train.  But we went out for pizza around the corner from the hotel in Sienna.

The pizzas were good.  Nice chewy crusts.  The beer was good as well.  They were out of Italian beer, so we had Belgian. 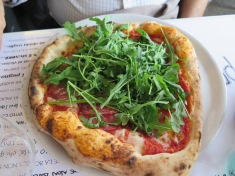 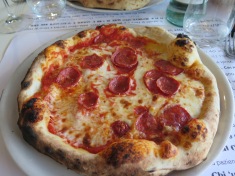 But the menu surprise was an appetizer featuring Philadelphia cream cheese.  As mentioned before, we are struck at how Philadelphia cream cheese pops up everywhere it Italy — in restaurants and in grocery stores.  A little bit of internet search reveals that the Italians are kind of obsessed with the stuff.  They consider it some type of American delicacy.   The appetizer we tried out of curiosity consisted of chunks of cream cheese with chives wrapped in ribbons of cucumber and sprinkled with dried oregano.  It looked like something from a 1950’s Good Housekeeping cookbook.  But we have to admit that we liked it.