Sometimes you just have to ignore first impressions.

We took the train today from Agrigento and thought ourselves very lucky to be able to depart as planned at 10:14 this morning. Last night we were told that a train strike would take place from 6:30 AM to 12:30 PM. But today, the powers that be must have woken up and decided, “Never mind.” We departed exactly on time (Eleanora, are you seeing this?), as has EVERY train we have taken since we got to Italy. Hope I haven’t just jinxed our run of luck.

We were sorry to leave lovely Agrigento, but needed to move on. When we arrived, we took a cab to our hotel with an extremely grumpy driver, who tried to overcharge us, for starters. Once we settled on a fairer fare, he then tried to kill us on the way. He must have learned to drive in Naples.

Our hotel room wasn’t ready, and the hotel lobby was filled with a tour group, so I got even more gloomy.

We then started walking around the city, which has some very high-end shops, pretty parks and nice streets near us. We are right across the street from the the Teatro Politeama, a major opera house and the home of the symphony, dedicated to Garibaldi. (In fact, now that we have our room, we overlook it and can admire it even further.) 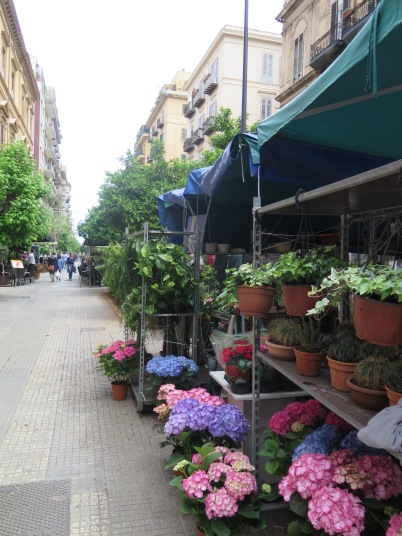 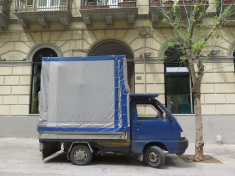 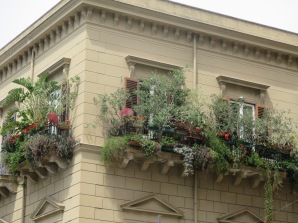 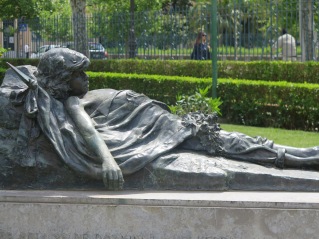 After lunch, we decided on a destination. related to a local celebrity who has lived almost everywhere we have been in Sicily. In honor of Pirandello, we were Two Characters in Search of a Haircut. This is a very scary proposition in a foreign country – or even your own – though I do try to remember that it is only hair and it does grow back.

When faced with too many options, we decided on a brand name, and found our way to Jean Louis David – with fingers crossed. The manager turned out not only to speak English, but to be English, from one of our new favorite cities, Liverpool. She whipped that staff into action to take care of us. We had a great time and two excellent haircuts, with lots of smiles all around. We are now to tell everyone we know how wonderful JLD is. The entire staff cheered us on our way. 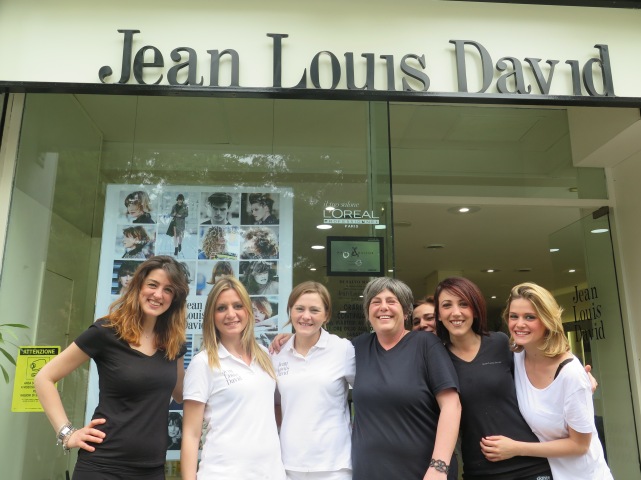 One of the promised epicurean delights of Palermo is its street food.  So the minute we dropped our bags at the hotel, we walked a few blocks to what is billed as the oldest continuing operation serving Palermo street food specialties.   This tiny hole-in-the-wall operation, called I Cuochini, has been in the same location since 1826, serving basically the same food all those years.  There were no seats. (And no photos allowed!) Just a couple of counters against the wall and a few tables outside in a courtyard to stand at.

There were several options.  We went for what are considered the most traditional.  First, arancinette.  This is a rice ball filled with either cheese or meat ragu (we chose the ragu) that is breaded and deep-fried.  The basic recipe has ancient origins.  And there’s a reason the recipe has lasted for millennia: It’s delicious and pure stick-to-your-ribs comfort food.  Then, panzertotti.  These are deep-fried dough dough pockets stuffed with a variety of different types of goodies.  We went for the most traditional filling, ham and cheese. 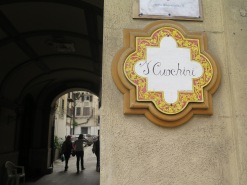 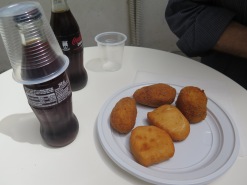 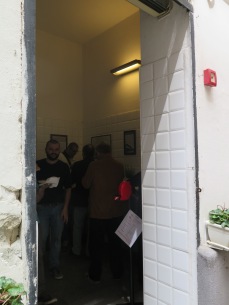 Each of these delights cost about a dollar.  So lunch today, with two Cokes (but no wine) was less than $7.  We have the names of other top street food places and a list of other possibilities.  However, we are not going to be trying the street food dishes that are considered the real star of the Palermo scene, namely, stigghiola (goat intestines filled with onions, cheese and parsley) or pani ca meusa (bread roll stuffed with sauteed beef spleen). We’ll be reading those signs very carefully before pointing at our next meal.

6 thoughts on “Welcome to Palermo”