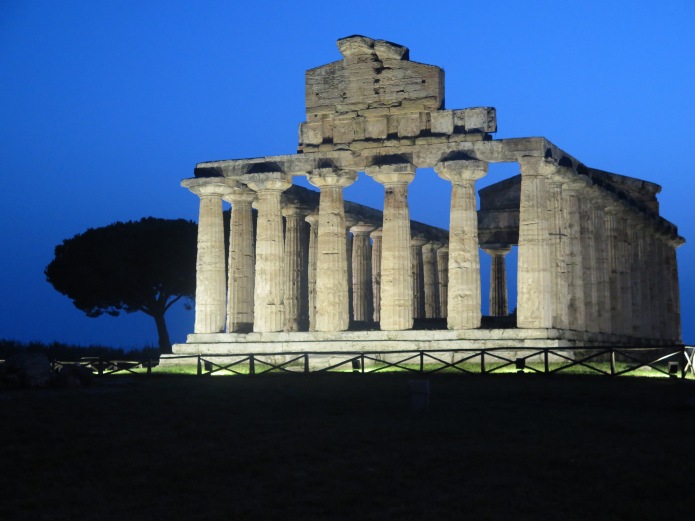 We had a stroll last night in Paestum, after all the tour buses had left, and the lights had come on around the temples. This was even better than the view in daylight, as it brought a whole new magic to the site. Imagine the silence and the moon.

Today was a travel day, all by train. Our hosts at the Hotel dei Templi were kind enough to drive us to the train station, as there doesn’t seem to be a taxi industry in Paestum. We caught an early train to the town of Sapri, where we had a 90-minute layover till our next train. We  spent it in a cafe next to the station which celebrated New York and featured crocheted fruit. Its main trade seemed to be the male pensioners who collected on the veranda and carefully nursed their one cup of coffee all morning. 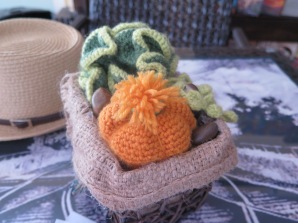 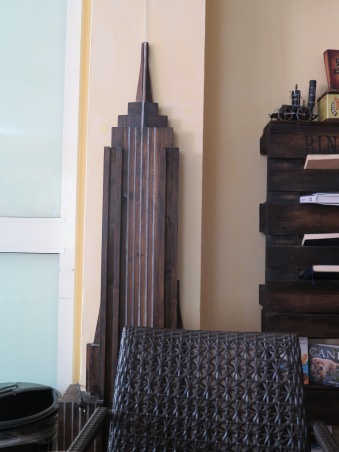 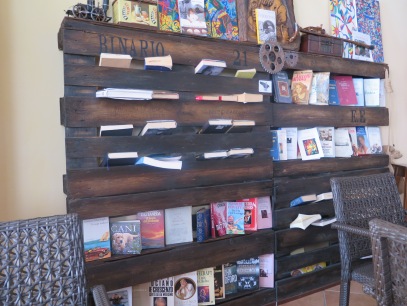 Our next train was the luxury leg of the trip – a five-hour journey down the western coast of Italy to Sicily. How did we get across the water, you ask? This train is one of the few left in the world that actually gets loaded right onto a ferry and allows you to travel uninterrupted across the Strait of Messina – from Villa San Giovanni to Messina itself. We went up to the salon level during the 20-minute journey and drank in the wonderful breezes. The water here was actually really navy blue. The trip was delightful and (Eleanora!!) every train we have had so far was exactly on time. What a pleasure. 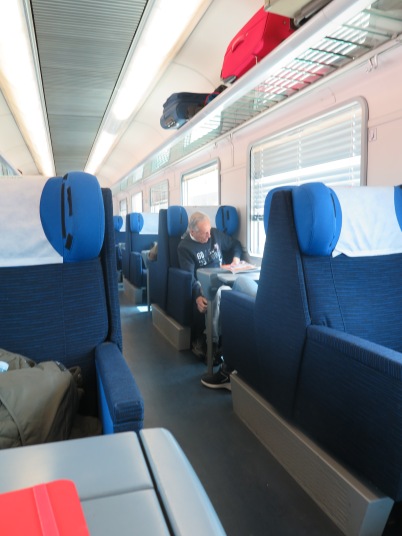 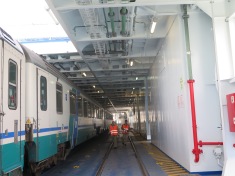 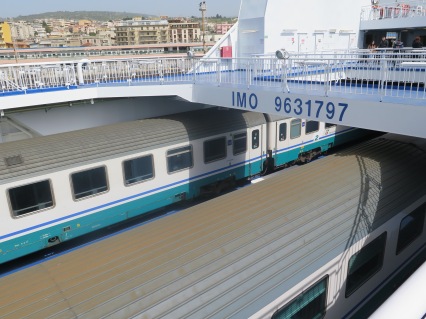 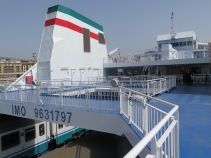 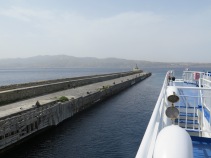 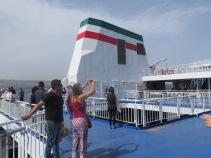 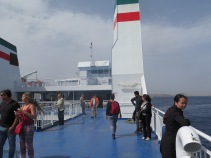 After another 20-minute train ride in Sicily, we arrived at our destination of Taormina. This town has been inhabited long before the Greeks arrived in 734 BC, and it looks like it has been courting tourists ever since. We are staying in an apartment here, and it didn’t take long to feel right at home. 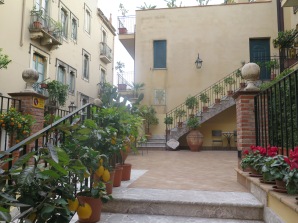 We did go out to find the travel agent who arranges the Mount Etna tours, which we have booked for Friday. Here’s an amusing sidebar for you Americans. Sprite seems to have a major promotional campaign using LeBron James on its cans. Why? I have also seen several young Italian men sporting his jersey. Why? Well, our travel agent tonight deepened the mystery. This young man has been to New York, because he is obsessed with Holden Caulfield of Catcher in the Rye fame, and wanted to walk Holden’s New York. Okay… But his other obsession is LeBron James, and he left New York to go to Cleveland eight years ago to see LeBron play for the Cavaliers. Why? He was devastated when LeBron went to Miami, but is very pleased he is back now in Cleveland. What is that all about? 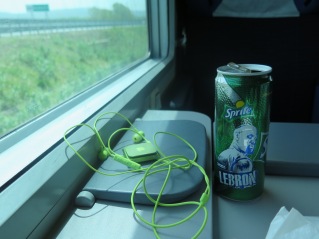 We have now collected some groceries, had a quick plate of pasta, and are settling down for a nice comfortable evening.

Lunch on our long train ride was a surprisingly good salad (for me) of lettuce, mozzarella (of course!), tomatoes, olives and slices of Emmental cheese, tossed in a very light dressing.  Jo went with a panino that featured a chicken cutlet.  We got these dishes at a tiny cafe next to the train station in Sapri, as there was no food service on the train.  Supposedly in the olden days, people on Italian trains would bring baskets of food and it would be passed around with fellow travelers.  Not these days.  Everyone was on their own. 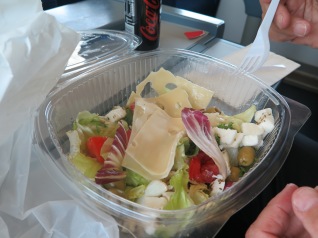 In the evening, after nearly nine hours of travel, we needed a little more.  And, again, because we were bushed and confused by the winding streets of a new town, we succumbed to the path of least resistance and fell for another restaurant with tablecloths and well-dressed servers.   As soon as we saw it was indifferent, we restrained from testing the kitchen.  Jo, looking for some comfort food, went for what the restaurant called spaghetti alla Bolognese.  I don’t think we will be encountering anything like that when we get to Bologna.  Or at least I hope not.  I tried to go with something vaguely regional — pasta with a shrimp and pistachio sauce.  Since pistachios are one of the great specialties of Sicily (pistachio gelato is supposedly best here), I decided to start my taste samplings immediately.  This version was just OK.  It was in a garlicky cream sauce with tiny (headless) shrimp, all sprinkled with toasted pistachio dust.  It was harmless, I guess. 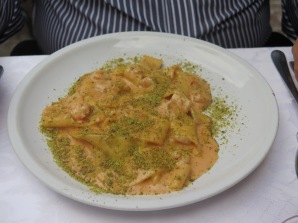 Tomorrow, we make an effort to track down something memorable.

4 thoughts on “Farewell to Paestum”