Call it sheer coincidence that we chose yesterday to visit Bayeux. We must have had battles on our minds, given all the noise from the 200th anniversary of Waterloo drifting across the Channel from England. Yes, there is a certain irony in our timing.

The centerpiece of our visit, of course, was the Bayeux Tapestry, which tells the story of the epic Battle of Hastings, in which William, Duke of Normandy (spoiler alert: hereinafter known as the Conqueror) and Harold, Earl of Wessex and at that moment, King of England, met in bloody battle.

The story is the Norman version, in which Harold – not portrayed as a complete rat – reneged on a promise of loyalty to William, who was to become king on the death of Edward the Confessor. When Harold took the throne for himself, well, that was not going to fly with William.

Harold fought bravely, it seems, but that arrow that struck him in the eye might just have come from God, according to the tapestry, which, in a glorious procession of embroidery that runs 230 feet long and is just 20 inches tall, tells the complete story from the almost immediate perspective of nearly 1,000 years ago. 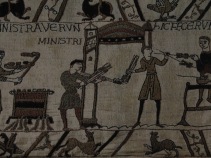 Even the gift shop reproductions convey some of its power. Now just imagine the tapestry displayed along the columns and across the front of the cathedral in a u-shape, so that the faithful but illiterate congregation could follow the story once a year. It is amazing to hear what this artwork has endured and survived.

The cathedral for which it was probably created is also spectacular, with many centuries of additions and revisions. The site is an ancient one and was once occupied by Roman sanctuaries. The present cathedral was consecrated on 14 July 1077 in the presence of William himself, and it was here that William forced Harold to take the oath of loyalty to him.

And we were there. 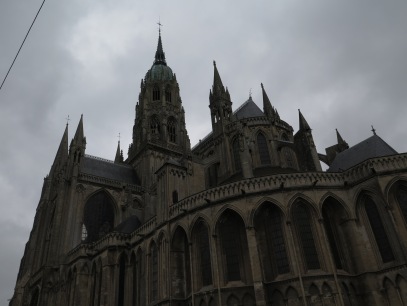 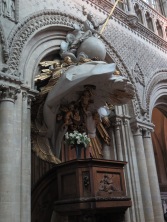 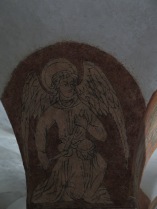 2 thoughts on “History, as always, told by the conqueror”