Lest our dining discoveries distract too much from all the more significant things we found along the way, at one point I decided to save them for a wrap-up post. Towel art has not made it to this part of the world, and much of the hotel art you will have seen before, so splurge on this overview of native cuisine…

Let’s start with something simple we discovered out of a lack of other choices – Hardee’s! This chain has what we found to be an outstanding hamburger that has served us well in a pinch. Great crunch on the bun and a homemade feel to the burger. Good stuff. 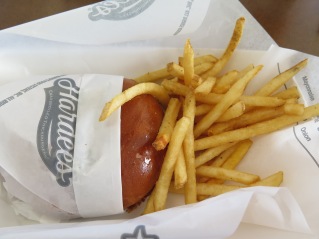 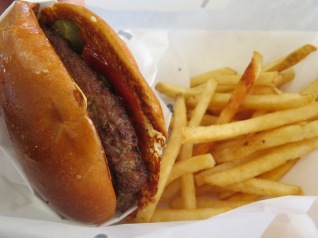 Also on the burger trail was something more exotic. NuWay Crumbles of Witchita doesn’t provide a patty but what they call there “loose meat.” Don’t worry about the dangers of meat on the loose – these were interesting and tasty finds. Messy and yummy when accompanied by the house-made root beer. 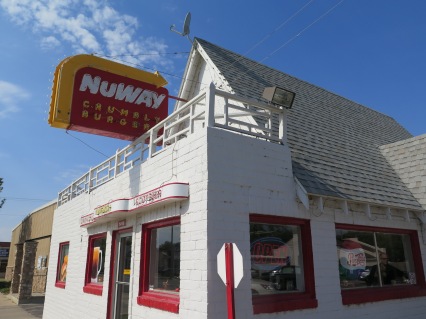 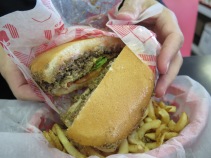 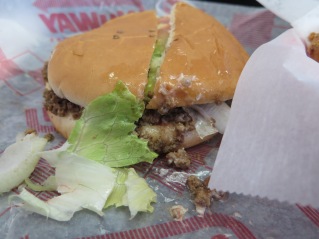 And then there was Freddie’s of Tulsa. This was an exceptionally tasty burger – almost worth a trip to Oklahoma! 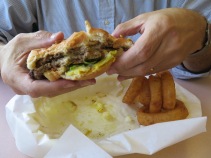 In the category of meat-on-a-stick, we have Cozy Dogs, a Route 66 attraction in Springfield IL. It’s been there for years, so we had to try it. The place even comes with its own library. I found that I don’t much care for corn dogs, but Don thought they were A-OK. 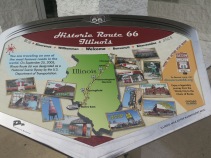 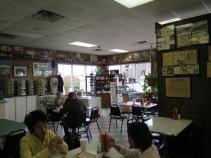 But the most amazing food specialty of Springfield IL is something called the Horseshoe. Best way to describe it is think of any meal you want, and then imagine it on slices of bread with cheese sauce or gravy with potatoes on top. And yes, it must have started out in a horsehoe shape. Don had a Horseshoe breakfast (there are two eggs and sausage with gravy under his hash browns) and I had the cheeseburger version. Couldn’t begin to finish it, but it was amazingly tasty! (Had to save room for huckleberry pie.)

And then there was a great dinner at the Brookville Hotel in Abilene KS. The family running this has been in business for years, though the building itself has moved. They do one thing only and one thing well – chicken dinner, family-style. All the fixings, and all delicious, ending with a scoop of vanilla ice cream. Perfect. 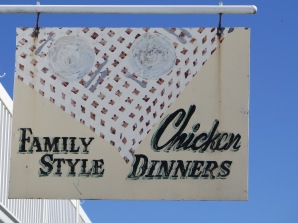 What about barbecue, you ask? Well, we can recommend Dink’s Pit BBQ in Bartlesville OK. Nothing fancy, but famous in those parts Their meat is smoked out back and devoured out front! 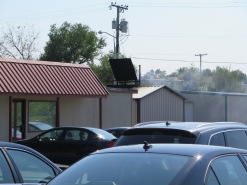 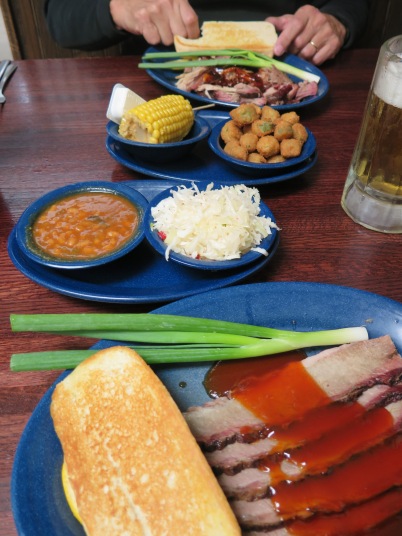 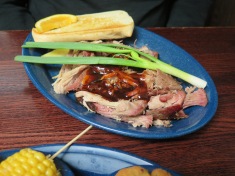 There are still some old-fashioned ice cream parlors around, and a great one was Lagomarcino’s in Moline IL. Great intact interior, soup and grilled tuna fish and a wonderful milk shake and sundae! Couldn’t be beat. 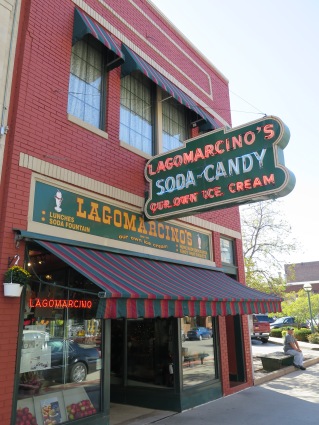 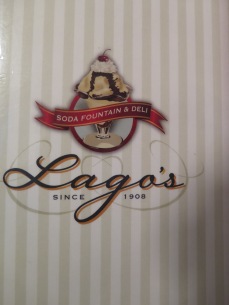 In a similar vein, we had to stop at Ted Drewes in St. Louis. Danny Meyer admits that Ted’s “concretes” were one of his inspirations for Shake Shack. You know concretes? It’s a frozen custard so thick and creamy that they turn it upside down when they give it to you, just to show how solid the yummy contents are. Great stuff! 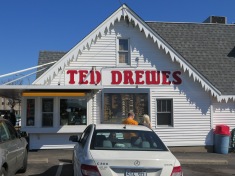 And then there was the Ox Yoke in Amana, back in Iowa. This was a real country experience, but all good. 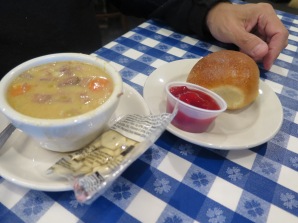 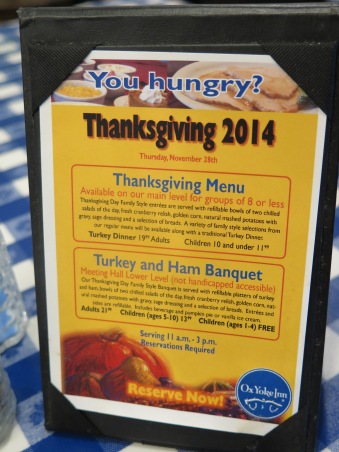 What else tempted us along the way? Well, Don had to have a Kansas City strip steak while in Kansas City, so off we went to famous Jess and Jim’s. Can’t miss it – there’s a steer on the roof and great chicken along with great steaks. 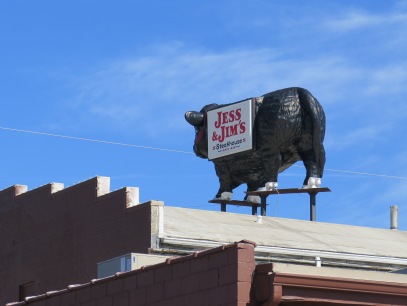 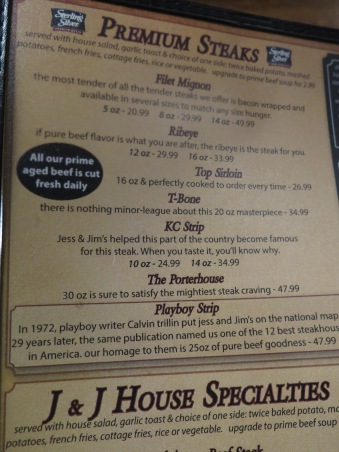 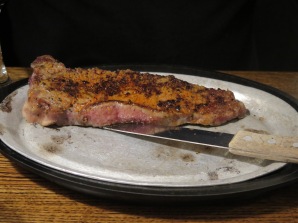 While staying at the Brown Hotel in Louisville, it is practically mandatory to have the “Hot Brown,” invented there. It’s an open-face turkey sandwich, but somewhat enhanced…

So those were the highlights of the last month – from the point of view of a fork. We ended our search for the local cuisine stars at a Frisch’s. This is a chain restaurant, but one that we grew up on, when we could first get in a car and meet some friends for a hamburger. Their “special sauce” can’t be beat. 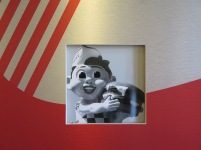 Today, we had our last meal in Columbus there with Don’s sister and niece. It was awe-inspiring to watch our Cassandra down a super Big Boy – the specialty of the house. Amazing what youth can process. 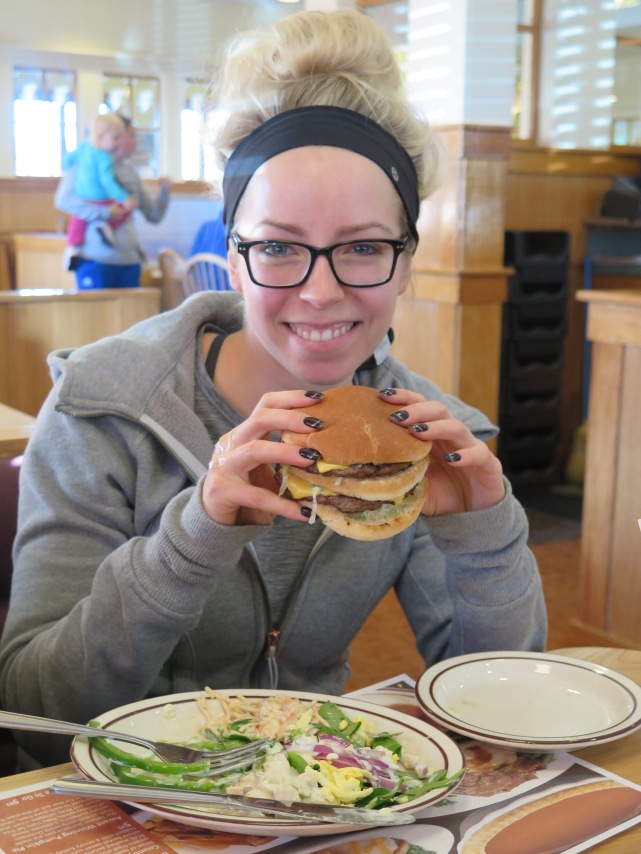 So that’s it. Now back to New York’s offerings. Can’t wait to have some Chinese!

One thought on “Tableside attractions”